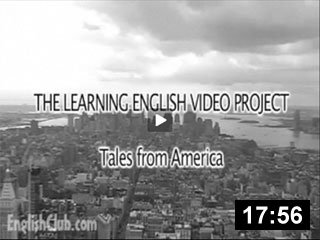 "Tales from America," the third episode of the Learning English Video Project, has been released for free access on EnglishClub.com. With learners around the world expressing a desire to learn American English, UK filmmaker Daniel Emmerson felt it was important to take his project to New York City, one of the top destinations for ESL learners. Prior to heading to New York, Emmerson expressed his excitement about interviewing students who were willing to travel a long way to "really experience the language in its home setting." The film is available with and without subtitles, along with online classroom materials, self-study exercises and behind-the-scenes commentary and footage.

In "The Making of the Project" Daniel Emmerson admits that he and his cameraman Joel Carr felt a bit "perplexed as to what [their] role was as filmmakers" as they too were experiencing their first taste of the Big Apple. During their stay in New York, the crew accepted tips from international students on how to get the full New York experience. They stayed in the metropolis near Wall Street and in an African community in Harlem. They also walked Central Park and visited famous sites including Coney Island, Madison Square Garden and the Statue of Liberty. The footage, shot both in and outside the classroom, depicts New York as a city that is optimal for learning English.

While the learners in "Tales from America" describe New York city as "big", "unbelievable" and even "lonely" at times, Emmerson uses the words "busy", "vibrant" and "very multicultural". The film profiles a handful of learners from diverse backgrounds, including students from Argentina, Austria and South Korea. One of the main messages from the film is that learning English is becoming a necessity in many parts of the world. Interviewees agree that whether you are a translator, a computer engineer or a yoga instructor English is an international language that people "need" in today’s job market.

As in previous episodes, Emmerson asks learners to respond to a few key questions. In "Tales from America", visitors to New York are asked why English is important, what problems learners typically have, and how being in New York helps learners improve. Interviewees are then asked to share tips on how to learn English. In the final sequence, Argentinean engineer, Adrian Petrov, looks retrospectively at his own path and advises learners to get serious about their goals: "What I did in the past was to study English about two hours per week, and it wasn’t enough."

Tales from America and the entire series is sponsored by EnglishClub.com for educational use. The third film runs 17 minutes, contributing to the total series length of 2 hours. The fourth film, "Studies in Spain" will be released next month, and pre-production for filming in China and Brazil is now underway. The many viewers who add their comments for each film are helping to shape future films in the series.