The measures, proposed by education department officials in the Association of Southeast Asian Nations (ASEAN), are intended to prevent large numbers of unemployed foreigners from countries including the US, the UK and Australia from flooding the local job market in search of employment as “native English teachers”.

ASEAN is following up on its recently-announced single visa plans. Under proposed new arrangements, foreigners wishing to teach English will be thoroughly screened both before and after arrival, but once admitted will be able to teach in any of the ten ASEAN countries (Brunei, Cambodia, Indonesia, Laos, Malaysia, Myanmar, the Philippines, Singapore, Thailand, Vietnam).

With a population of about 600 million and covering an area of 4.5 million km2, ASEAN is the world’s fastest-growing English teaching market

Under the scheme, TEFL (teaching English as a foreign language) teachers from outside ASEAN will receive an Alien Teacher Fitness Certificate (ATFC).

Teacher representatives have reacted angrily to the ATFC process which starts with police background checks followed by on-the-spot tests at the airport that include basic English ability, drugs and personal hygiene. Brian Pullman of TEFLA (Teachers of English as a Foreign Language in Asia) called the procedure “degrading and racist”. 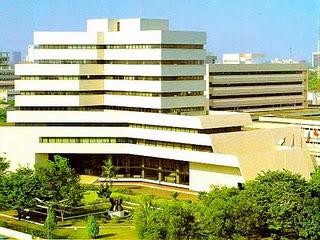 Fatima Fasihpusih, an official at the Jakarta-based ASEAN Secretariat (pictured left), insisted the requirements were needed: “As a result of high demand for English, relaxed entry requirements and poor standards of TEFL training, we have been receiving the dregs of the Western world, many of them drop-outs who would be unemployable in their own country. It’s up to us to raise the bar.”

Analysts say many foreigners who find employment as English teachers are unable to find work in their own countries and could be denied the opportunity to live and teach in the world’s fastest-developing region.

“Some of our members are totally dependent on the money they earn teaching in ASEAN and send home to their families,” said American Brian Pullman in a phone call. “Many could not afford the fee for the so-called fitness certificate, let alone all the costs they’d waste if they failed. Students have already told us it’s not fair.”

Ms Fasihpusih defended the proposals, saying they would be positive for “genuine, high-calibre” foreign teachers as they would be able to move freely between ASEAN countries with no further visa or Teacher Fitness Certificate requirements.

Asked why the tests could not be done before arrival – so saving teachers who failed the cost of travel and accommodation – Ms Fasihpusih said: “Apart from police background checks, all tests must be done within ASEAN to ensure transparency and accuracy of the results.” According to documents released by the ASEAN Secretariat, all applicants must enter ASEAN at a designated “Point of Entry” (POE), which will be a major airport in almost all cases.

Ms Fasihpusih denied rumours of a mandatory delousing procedure for foreign teachers on arrival at the POE. “There is no truth in that. IQ and urine tests yes, stool tests maybe, but we will not be going so far as delousing. That’s silly.”

The IQ (intelligence quotient) tests reflect a real concern in ASEAN nations over social order and stability. In a recent article in the Thai language newspaper Thai Post, Dr Metha Winyou wrote: “The IQ test will be important because there is evidence of low IQ among the sort of foreigners who teach English here. They often do so because they cannot do anything else. Many have social problems and are unable to hold down a job. People like that are prone to violence and irrational, anti-social behavior – which causes serious problems locally, both for our police and for our young people.” 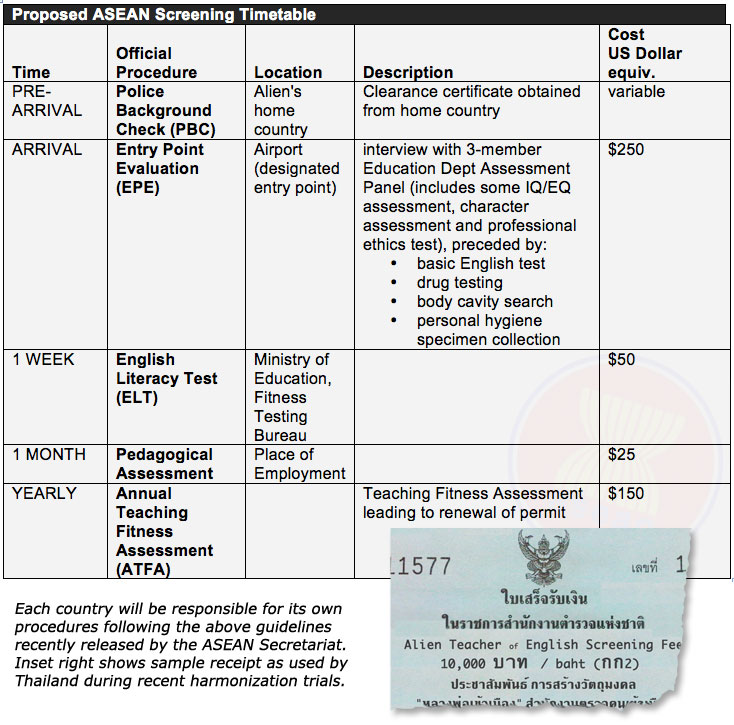 Echoing Dr Winyou’s concerns, ASEAN officials cited recent research that has found many Westerners are turning to teaching English abroad after failing to find employment in their own countries. This was due to a range of factors, researchers found, including low IQ levels, poor social skills, inadequate personal grooming and alarmingly low levels of personal hygiene. Their resulting exclusion from the workforce, and from mainstream society in general, can lead to anti-social attitudes, mental-health issues, and serious abuse of drugs and alcohol. For many of these “sub-standard” individuals, teaching English abroad remains one of the few employment options still open to them, and it is these undesirables, ASEAN officials maintain, that the new procedures are intended to screen out.

Andrea Madding of the EL chain of language schools welcomed the proposals, saying that local teachers of English were often better than American or British teachers.

“It’s hard to believe but in one recent survey 12% of foreign English teachers were found to have a significant degree of literacy deficit,” she said. “We’re talking about native-speaking English teachers being borderline illiterate. Clearly an absurdity. Though not so surprising considering the news about the Dutch doing better than the British at IELTS. Visiting English teachers definitely need an upgrade.”

She denied suggestions that EL had lobbied for the proposals because of the lower salaries that local teachers receive [about 30% that of foreign teachers].

Once through the initial assessment phase at the airport, teachers will take an English Literacy Test one week later and have a Pedagogical Assessment after one month. Once the ATFC is granted, it can be renewed annually and used anywhere within ASEAN.

Officials were unable to quote a target date for implementation of the plan. Based on past experience of similar ASEAN harmonization moves it is likely to be some years before the plan takes effect, though a partial pilot scheme will be rolled out in Thailand early in 2012. Observers from the European Union and other blocs will be attending to assess the potential for similar regulations in their own regions.

Ad: Word Up – The world’s most popular ESL board game

Govt. Health Warning: This article was published at 12:01 am GMT on April 1st, 2011. It is of course an April Fool’s Day hoax and should not be taken on an empty stomach.