Cambridge, UK – An independent UK film crew has set out to answer a series of questions, about how and why so many people are learning English as a foreign language. The “Learning English Video Project” was shot in England, Morocco, Romania, Spain and the USA and is now in post-production. This is the first documentary series of its kind to touch on all of the main aspects of ESL (English as a Second Language) from the student’s perspective.

UK filmmaker Daniel Emmerson and his co-producer Joel Carr travelled with a list of questions including, “What is the most difficult aspect of learning English?” An experienced ESL teacher himself, Emmerson was inspired to create the series after noticing a large divide between students who take English for exam purposes and those who want to communicate in English in their daily life. Interviews were conducted in a case-study format, providing important insight into how ESL exams and current learning environments prepare students for work/life with native speakers. Emmerson calls the documentary series a collaborative affair that allowed him to “combine his passions” for film and language.

After visiting the college centre of Cambridge in England, Emmerson noted: “I found it almost inconceivable to find that one of the most diverse and international communities I have ever come across was to be found no further than 70 miles away from where I grew up!”

However, with so many students travelling to America to study English, the crew felt it was crucial to take the film beyond Europe. “New York is a metropolis of culture and language. I cannot think of a better destination for international students to study English and American culture,” said Emmerson. The filmmaker felt that capturing ideas and experiences from different parts of the globe was an essential aspect of the series and hopes to continue the project in Asia and South America in 2009. 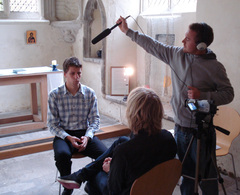 The film’s sponsor, EnglishClub.com, will make the films available for free online viewing as a 6-part mini-series starting this Spring. Any organisation interested in posting the films on their site will have access to the embedding code. Downloadable and DVD versions will also be available for special purposes. Each film will be available both with and without subtitles, making for useful teaching aids. The series may also be used in conjunction with class project work based on free worksheets provided by EnglishClub.

EnglishClub, a free independent website that offers e-learning materials and interactive resources for ESL students and teachers, is the parent site of TEFL.net which sponsored Emmerson’s previous documentary film “Talking TEFL”, an exploration of Teaching English as a Foreign Language.

EnglishClub founder Josef Essberger commented: “Members and visitors have been following the film crew since the early stages of production via Daniel’s official film blog. Over 1,500 readers submitted comments to the blog during the production stage and the video blogs alone have accumulated thousands of views.”

Blog readers were invited to participate in the making of the film by offering suggestions and answering questions that pertained to the study.

The central audience of the “Learning English Video Project” is ESL students, especially those considering studies in a foreign country. “Being able to film on location meant we could capture a real essence of street life,” said Emmerson. This is something many ESL students do not have the privilege of doing before they register for a programme away from home. ESL schools and organizations will also be interested in showing this film as a learning aid and/or introductory video.