Today’s technology allows journalists, webmasters, teachers, and a variety of contract workers to telecommute from all over the world. I’ve been working virtually with EnglishClub founder Josef Essberger for over 11 years.

In the past decade, Josef and I have worked remotely on a wide variety of EnglishClub projects and developments, including the Learning English Video Project, This Week in History, and Listen to News. We also developed and continue to maintain EC’s social network, MyEnglishClub, which has grown to 115,000 members in the past few years. We correspond daily via email, and have spoken on the phone just once. Occasionally we exchange packages and large files via snail mail. This week, we met in person in Toronto, Canada! 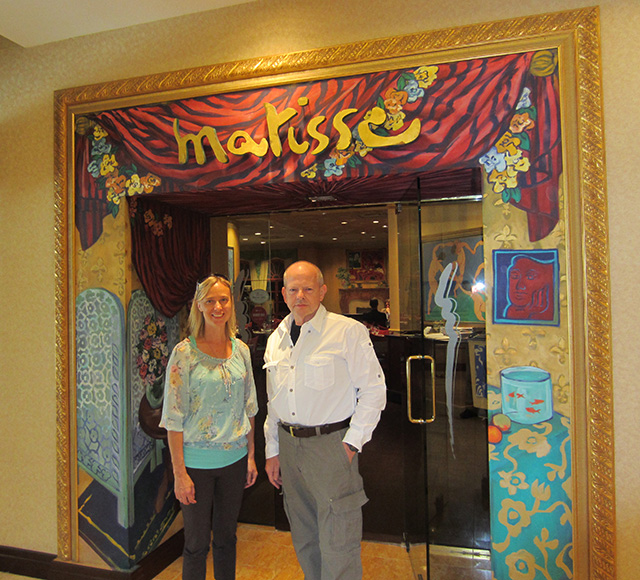 When I heard that Josef was coming to Canada this spring for a personal trip, I was thrilled at the opportunity to meet him. We enjoyed lunch together on Yonge Street this past Friday afternoon and took a subway ride down to the CN Tower for a photo opportunity. 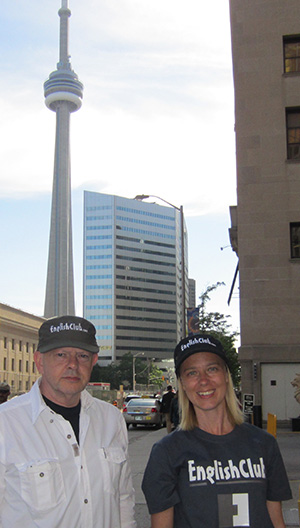 Josef and Tara on Front Street near the CN Tower

We learned that Toronto Blue Jay fans on their way to a baseball game were the most willing photographers. It was fun giving Josef and his brother a pronunciation lesson about Toronto street names. They also asked for tips on traffic and road rules. Though Britain apparently has a “motorway” that’s known as the biggest parking lot in the world, they had yet to experience 16 lanes of the 401 (the four-oh-one) during rush hour. Let’s hope traffic stays light on the “highways” as they make their way to the nation’s capital of Ottawa!

In addition to getting to know each other a bit better, and chatting briefly about site development, we spent much of our time comparing and observing language and cultural differences. (A cheese plate after lunch?) British and Canadian English are not as similar as you may think, and it has always been useful to have both perspectives while working on EnglishClub resources.

In many ways, other than spelling, Canadian English (and culture) is closer to American English. Interestingly, neither of us knew exactly what an Americano was. While I told Josef that his beverage was half espresso, half coffee, I have since learned that it is actually part espresso, part hot water. (Sorry, Josef!) Regardless, we enjoyed a few cups together, knowing that it may be another decade before the opportunity arises again.

While it was wonderful to meet in person, we found that talking shop wasn’t the priority in our face-to-face meeting. Distance and time zones have never been a problem for the EnglishClub team. Team members from around the world have helped make EnglishClub what it is today. Currently, singer-songwriter Jonathan Taylor is working on EnglishClub songs from his recording studio in Bulgaria. Post production work happens in Canada and Thailand before being published for the world.

Our MyEC moderators are other important contributors whom we’ve never met in person. They live in various corners of the world, including the Philippines, Japan, and the UK. In fact, members from all over the globe work on their English together in EC’s chat room, forums, and blogs. Despite their physical distance, they develop strong relationships and enjoy exploring the language together from afar. It’s always fun to see photos of our members meeting each other in person. Have you met a MyEC friend in person? Be sure to share your experience in the MyEC photo gallery.

Until we meet again…