EnglishClub : Blog : New Games For Practising Past, Present and Future

New Games For Practising Past, Present and Future 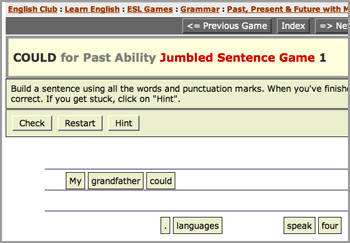 Announcing a complete new section of 720 drag-and-drop games that learners can play to practise talking about TIME – past, present and future. These games, specially created for EnglishClub by Matt Errey, cover pretty well every way in which we talk about time in English, whether using tenses, special constructions like “going to” and “used to”, or modal auxiliary verbs like “must” and “would”.

The games are in sets of ten, with each set focussing on just one particular way of talking about the past, the present or the future. The first game in each set is the easiest, and the last game is the most difficult. In each game, the words in a sentence are mixed up or “jumbled”, and players try to put them back into their correct order.

For example, one of the sets focusses on using “going to” to talk about future plans or intentions. In a game in this set, players might have to make a sentence with the following words: “movie”, “to”, “I’m”, “tomorrow”, “a”, “see”, and “going”. Players can drag these words around, trying different combinations, until they come up with a sentence that they think is correct. If they come up with either “Tomorrow I’m going to see a movie” or “I’m going to see a movie tomorrow”, they earn the maximum score of 100%. Players can then click on “Next Game” to play another game about “going to”.

There are 720 games in 72 different sets, and learners who gradually work their way through the whole collection are sure to improve their understanding of the many ways in which we can talk about time in English.

Find and play these games at:
www.englishclub.com/esl-games/grammar/