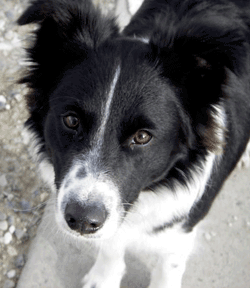 Following a report in the EL Gazette and the recent introduction of tougher rules designed to stop abuse of the student visa system, the UK Government has completed a feasibility study to determine whether dogs could usefully contribute to the English ability assessment – an essential part of the new visa procedure – thus freeing up valuable man-hours and saving the British taxpayer up to £23,000,000 per year.

The possibility of using dogs to test language fluency was given credence in an article in the March 2010 issue of the EL Gazette (print-edition) headlined “Dog masters ESOL” (English for Speakers of Other Languages). According to the report, members of the RSPCA (the Royal Society for the Prevention of Cruelty to Animals) near Manchester, England had been “puzzled” [in September 2009] by a stray male border collie that would not respond to commands. After discovering that the dog had been brought to England from Poland, and did in fact understand Polish commands, the RSPCA staff started teaching it basic English commands, using a “reward-based” programme. Luke Johnson, one of the RSPCA animal care workers, described how the dog, known as Cent, became bilingual within 4 months.

Logo of the UK Border Agency

Coincidentally the story had already come to the attention of Ms Lin Homer, head of the UKBA (UK Border Agency) charged with implementing the Labour government’s tough new rules for student visas. Under the new rules, applicants will need to speak English to near-GCSE level. One of the problems that UKBA faces is that while it is relatively easy to automate the testing of input skills (listening and reading), the output skills (speaking and writing) require human intervention and can be extremely costly. Even allowing for the fact that testing costs will be paid for by the applicants, the infrastructure necessary to put in place such elaborate testing, especially for pronunciation – a major concern of Home Secretary Alan Johnson – will prove expensive and open an already weakened Labour government to charges of reckless spending from the Conservative and Liberal opposition parties. All this as a general election approaches. “The whole subject is extremely political,” commented Jane Larynx, a press officer at the Home Office newsdesk. This is a major reason why, according to sources, when Ms Homer put the possibility of using animals to the Home Secretary at a meeting on October 22nd last year he ordered immediate action. 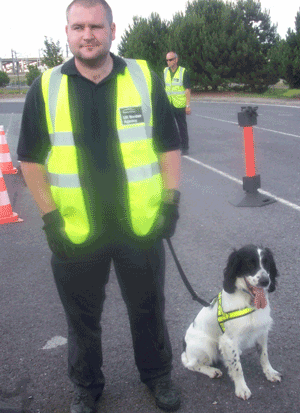 In the initial stages, it is proposed, dogs will help to assess student applicants’ pronunciation by being trained to respond only to “correct” accent, with word stress and sentence stress being a major component of the testing algorithm. UKBA already has a large number of sniffer dogs of various breeds, and some of these have been retrained for the study as they are well used to obeying commands. “Welsh border collies like Cent are very intelligent dogs, but not necessarily the best breed to use for pronunciation testing,” explained Dr Ian Brown, Chief Veterinarian at UKBA.

If a dog successfully completes a pre-determined circuit by following commands issued by a student applicant, the applicant will be deemed to have passed the pronunciation test. “Of course,” said Ms Larynx, “at present we can only use dogs for a very limited part of the overall language test, but we are exploring the possibility of using dogs – and even other animals – more widely in language acquisition and guidance, though a lot of that information must remain classified as there are significant security issues at stake. We don’t want terrorists for example to know the full role that animals play in our language detection and verification programmes. Nevertheless, I think you can take it as read that within the next decade dogs will be at least as common as teachers in the language classroom.”

Not everyone agrees. Human rights activists are angry at what they call a “degrading and inhuman” procedure. “It is an outrage to human dignity to expect people wishing to visit Britain for perfectly legitimate study reasons to undergo what amounts to an examination by animals,” said BIHR (British Institute of Human Rights) spokesperson Brian Routedge. “We shall be taking this issue to the European Court of Human Rights if the government does not modify its plans in a responsible way.”

Please let us know your thoughts in the comments section below, but complaints should be addressed to Ms Lin Homer: lin.homer@homeoffice.gsi.gov.uk

Ad: Word Up – The world’s most popular ESL board game

Govt. Health Warning: This article was published at 12:01 am GMT on April 1st, 2010. It is of course an April Fool’s Day hoax and should not be taken on an empty stomach.