EnglishClub : ESL Magazine : Could you Live without Fast Food?

Could you Live without Fast Food? 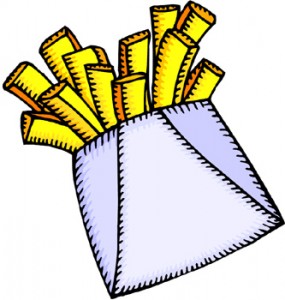 McDonald’s recently pulled out of Iceland, shutting down all three of its franchises in Reykjavik. Iceland has been hit hard by the global recession. It wasn’t cost effective for McDonald’s to remain in business there. A few days ago, thousands of Icelanders lined up for one last McDonald’s meal. Many said they were sorry to see the fast-food restaurant go.

It is easy to get used to the convenience and taste of McDonald’s food. In North America, many families are accustomed to eating out at McDonald’s and other fast-food restaurants on a regular basis. There is at least one McDonald’s in most major towns and cities. Some of the larger regions and cities have several to choose from.

Though it can be costly for families to eat out, fast-food gives busy parents a break. Parents justify the lack in nutrition by calling fast-food a “treat”. Other excuses for eating at fast-food restaurants include:

Do you frequent McDonald’s? What is your excuse for eating fast-food? Could (or do) you live without it?

Wordchecker:
pull out: to remove yourself from a previous plan or agreement
franchise: a person or group that sells products on behalf of a company or chain for a portion of the profit
cost effective: makes good financial sense; profitable
sorry to see something go: to be sad that something is leaving
accustomed: used to
costly: expensive
justify: to offer a reason for a decision
lack: the state of not having
treat: something tasty you only get once in a while
craving: a strong and sudden want for something specific
starving (idiomatic): very hungry (literal meaning=dying from lack of food)
frequent (used as a verb): to go somewhere often

Written by Tara Benwell for EnglishClub | November 2009
Tara Benwell is a Canadian freelance writer and editor who specializes in materials and articles for the ELT industry.