No X Factor this Xmas 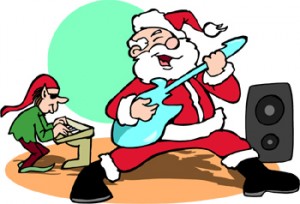 Have you heard of the Christmas No. 1 tradition in the UK? Each year, on the Sunday before Christmas, a music single is announced as the Christmas Number 1 in the UK. Past winners have included the Beatles, The Spice Girls, and Michael Jackson. Sometimes unlikely winners top the charts, such as the “Bob the Builder” theme song in 2000. Once in a while, a Christmas song, like “Mary’s Boy Child” wins. The winner is based on total sales of singles. These days total sales includes music downloads.

Guessing who will be at the top of the charts right before Christmas used to be a fun game. People participated in friendly bets and often rooted for an underdog. That was before Simon Cowell and his popular reality talent show “X Factor”. For the past four years (2004-2008) the winner of X Factor also claimed the Christmas No 1 spot. Nobody expected 2009 to be any different…

Nobody except Jon Morter, an X Factor viewer who wanted to get the UK tradition back on track. This year Jon Morter created a Facebook campaign asking people to vote for his favourite song instead of the top X Factor winner’s song. Morter’s favourite song, “Killing in the Name” by Rage Against the Machine, is a 9o’s tune that is far from Christmasy. Nevertheless, it is a song that many people around the world know and like. In fact, close to a million people helped Morter bring it to the top of the charts, pushing the shoo-in (X Factor winner Joe McElderry’s cover song, “The Climb”) down to number 2.

Not only did the Facebook group “Rage Against the Machine for Christmas No. 1” bring down Simon Cowell’s leading man, it also raised over 100, 000 US dollars for a homeless charity. That’s what you call killing two birds… in the name of number one.

What is your favourite single this Christmas? Provide the song title and artist in the comments below.

WordChecker
single: a song that is released from a music album and played on the radio
charts: the list of most popular songs and musicians
theme song: the song that is played before a TV show
rooted for: cheered for; hoped someone would win
underdog: the unlikely winner
X-factor: popular TV show; literally means to have a quality or appearance so amazing that it cannot be described
back on track: functioning properly as it used to be
shoo-in: the one that is expected to easily win
cover song: a remake of another artist’s song (in this case Miley Cyrus’s)
leading man: the most important person in a show
kill two birds with one stone (the real saying): getting two things done with one action

Written by Tara Benwell for EnglishClub | December 2009
Tara Benwell is a Canadian freelance writer and editor who specializes in materials and articles for the ELT industry.