Question of the Month: June 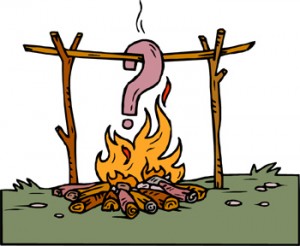 This month’s burning question came via a follower of @EnglishClub on Twitter. This friend used 3 pleases, so it must be an important question.

Question: “A bad habit is smoking cigarettes.” Is this sentence wrong?

Answer: Learners sometimes request a second opinion if they disagree with an Answer Key or a teacher’s mark on a test. In many cases the construction of the usage in question follows a simple rule. It looks right, and the learner cannot understand what the problem is. Sometimes the problem is related to ambiguity. This is just a fancy word that means that a word or phrase could have two or more meanings.

Here are some sentences that are ambiguous:

Let’s look at the sentence from our twitter friend again:
“A bad habit is smoking cigarettes.” (How does a habit smoke cigarettes?)

If the reader ( or listener) thinks of “is smoking” as a present progressive verb form  (rather than “smoking cigarettes” as a noun phrase-as intended) it seems the habit is doing the smoking. Even though the second possible meaning is illogical (a habit can’t smoke) it still sounds awkward. It might even make you form a funny picture in your head. Ambiguous headlines such as KIDS MAKE GOOD SNACKS often make people laugh. This is because our brains form a mental picture of the unintended meaning.

The main question still remains. Is it “wrong”? That depends on your definition of wrong. Yes, it could confuse someone. Yes, it could cause someone to ask you to repeat what you said. Will you still get your point across? Yes. Most likely.

Try to avoid ambiguity, but don’t beat yourself up over it. We all use poor construction from time to time. It is more important to avoid ambiguity in writing. Why?  Because the writer is not always present to clarify the intended meaning. Reading your writing out loud is a good idea. You may detect your own vague and ambiguous sentences when you hear them. Rewrite the awkward sentence until it sounds perfectly clear.

Written by Tara Benwell for EnglishClub | June 2010
Tara Benwell is a Canadian freelance writer and editor who specializes in materials and articles for the ELT industry.