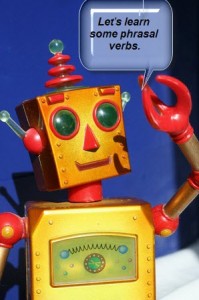 Machines have replaced bank tellers, parking attendants, and even grocery clerks. Will robots replace teachers? Some people think this could happen in the next 10 years.

If robots do replace teachers, it will probably happen in Japan first. Japan has an obsession with robots. A giant robot from the Gundam TV series is now overlooking the Tokyo waterfront.

There is already a robot teacher named Saya teaching in an elementary school in Japan. A professor from the University of Tokyo created her. Saya is multilingual and she looks like a human. She can discipline students, take the attendance, and display human emotions including: sadness, fear, anger, disgust, surprise, and happiness. She can also give out homework.

Would you want to learn English from a robot? Do you think the next generation of children will have personal robots at home?

Written by Tara Benwell for EnglishClub | July 2009
Tara Benwell is a Canadian freelance writer and editor who specializes in materials and articles for the ELT industry.