EnglishClub > Joe's Cafe > Curiosities > What’s this guy got to do with English?

What’s this guy got to do with English?

This guy is “Guy Fawkes“, and English was his mother tongue. His death is gruesomely celebrated in England every 5th November when ordinary people mindlessly burn effigies of him on bonfires. 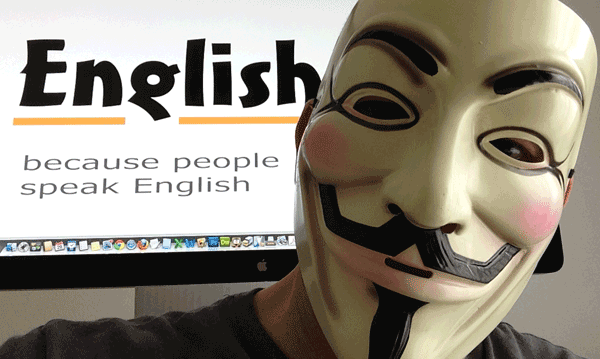 What did Guy Fawkes do to deserve such venom? He plotted with others to assassinate the king of England (and of Scotland) by blowing up Parliament during its state opening in 1605. Their motives were politico-religious… But they failed. Their plans were leaked and Guy Fawkes was the one conspirator found guarding the gunpowder under the House of Lords – all 36 barrels of it, enough to send the king and Parliament to kingdom come. Guy Fawkes was questioned but refused to speak, except to give a false name – John Johnson. Eventually the king signed orders for him to be tortured (“gently at first”). An observer (Sir Edward Hoby) noted “Since Johnson’s being in the Tower, he beginneth to speak English.” “The Tower” was the Tower of London, specifically, in this case, its torture chambers. In fact, under the effects of torture – probably the rack – Guy Fawkes broke and revealed not only his own true name but the names of his co-conspirators.

The mask you see in the photo is a representation of Guy Fawkes. This particular representation, designed by illustrator David Lloyd, first appeared in Alan Moore’s comic book series V for Vendetta (starting 1982) and subsequent film adaptation (2006). The story concerns resistance to a repressive regime set in England in the then not-too-distant future. The mask has since come to be used as a symbol for the online hacktivist group Anonymous, and more broadly as a symbol of popular protest against corruption and government sleaze and of resistance to authoritarian Western governments (although its import and use is banned by some Western-leaning regimes such as Saudi Arabia).

By Josef Essberger for EnglishClub June 2013
Josef started teaching English as a foreign language in 1991 and founded EnglishClub for learners and teachers in 1997.