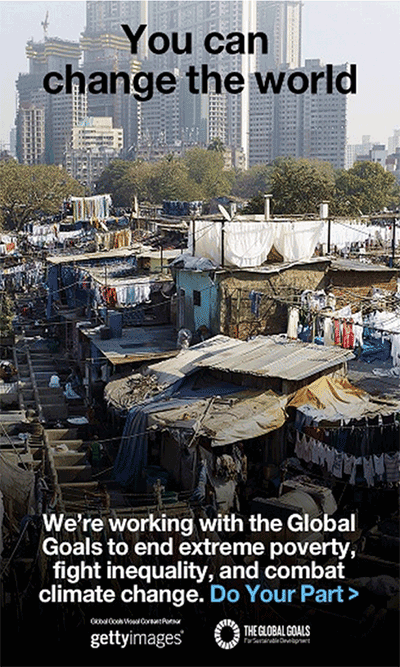 What is this advertisement trying to say? It appears to show two different “worlds”, but which should be changing to which? Should they both be changing to something else? Please give your views about the implications of the photograph.

extreme (adjective): to the greatest degree; very great; very severe; very serious
poverty (noun): the state of being very, very poor; the state of being extremely poor
inequality (noun): difference in size or amount
combat (verb): fight
do your part (phrase): participate; help
implication (noun): a conclusion that you can draw from something even though it is not actually stated

Ad links to: globalgoals.org. Shown here as “fair use” for educational purposes.

By Josef Essberger for EnglishClub September 2015
Josef started teaching English as a foreign language in 1991 and founded EnglishClub for learners and teachers in 1997.