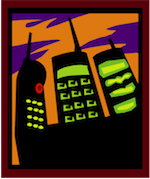 Some scientists now say that

mobile phones are dangerous and

may damage our brains

But not all scientists agree.

What do you think?

By Josef Essberger for EnglishClub September 2011
Josef started teaching English as a foreign language in 1991 and founded EnglishClub for learners and teachers in 1997.