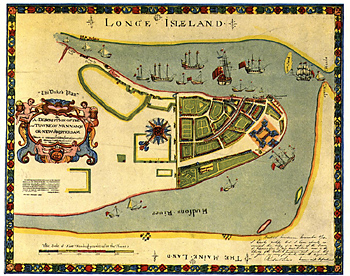 Discussion Questions: The borough of Brooklyn in New York City was also named after a town in the Netherlands. Does your birthplace or hometown have a story for its name?

New York City Was Once New Amsterdam
Have you ever wondered how New York City got its name? During the Dutch Golden Age, in the 17th century, New York City was called New Amsterdam. It was named after Holland’s largest city by Dutch settlers in 1624. New Amsterdam was the capital of New Netherland, where the Dutch were heavily involved with the fur trade. In 1664, the English organized a takeover and the colony was peacefully surrendered. The British renamed the city New York after the Duke of York who had organized the takeover. The Dutch reclaimed the area briefly in 1673 and named it New Orange. By 1664, however, the English were back in control, and it has been New York ever since.