1. The first rubber ducks were found in

The first rubber ducks were found in Alaska.

2. The oceanographers studied the ducks in order to

The oceanographers studied the ducks in order to map out ocean currents.

3. Today, these rubber ducks are valued at

In 1992, a cargo ship on its way from Hong Kong to the United States lost a crate in the Pacific Ocean. That crate contained over 28,000 rubber ducks, most of which are still in the ocean today. At first, this was simply seen as a small financial loss. However, a few of these ducks made their way to the coast of Alaska, where they were found by scavengers. After this discovery, a team of oceanographers decided to track the ducks as they moved around the world. The oceanographers offered $100 rewards to anyone who found one of these ducks, so that they could make a map of the ducks’ journey. Rubber ducks began to appear in Japan and Australia. Some even travelled across the Arctic Ocean, ending up on the coasts of North America and Europe. The oceanographers used the information they’d gathered from studying the ducks to confirm their predictions about the paths of major ocean currents. The story of the ducks was also used to raise awareness about the dangers of dumping plastic in the ocean. Today, these rubber ducks are still being found on shores. They have even become highly valued collectibles – often being sold for up to $1000.

The Causes and Effects of Climate Change

The Causes and Effects of Climate Change

1. The gas that is put into the atmosphere by burning fossil fuels is

The gas that is put into the atmosphere by burning fossil fuels is carbon dioxide.

Scientists predict that by 2050, the Arctic ice will be completely melted.

3. One easy way to prevent climate change is

Climate change is a major problem in the world today. Scientists believe that climate change is mainly caused by an excess of greenhouse gases, like methane, carbon dioxide, and nitrous oxide. Humans put these into the atmosphere with our everyday activities. The excess of atmospheric carbon dioxide is caused by burning fossil fuels, which we use to power our cars. Climate change is expected to cause many issues in the future, such as droughts, strong storms, and the loss of ecosystems. Scientists predict that the Arctic ice will be completely melted by 2050. However, there are lots of simple ways to help prevent this. Using less energy, taking public transportation often and eating meat less are all easy ways to fight climate change.

END_OF_DOCUMENT_TOKEN_TO_BE_REPLACED

Cambridge Dictionary Announces “Upcycling” as Word of the Year 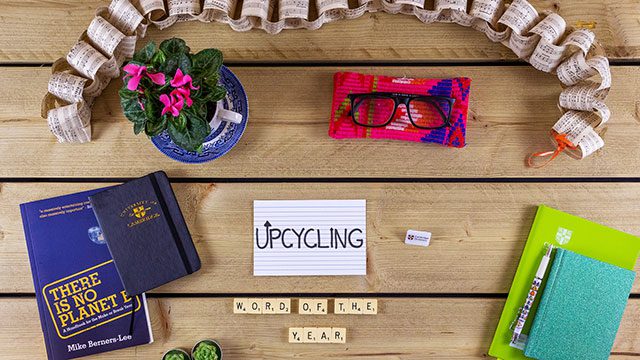