EnglishClub : TEFL Articles : How To Teach Shapes To Young Learners

How To Teach Shapes To Young Learners

Alex Case
How to teach the CLILtastic topic of shapes, also vital for cutting down on L1 in classroom instructions. 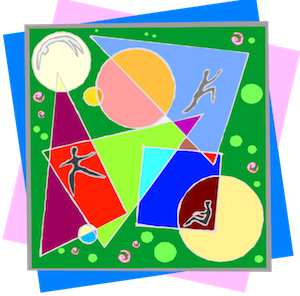 Language to describe shapes is a popular topic in YL classes, is vital for classroom instructions during craftwork etc, and is one of the easiest things to recycle with other subjects. I therefore try to bring it into most of my classes as early as possible, even if it isn’t in the textbook. This article explains what language you can introduce and how.

What Shapes Vocab To Teach

Especially with very young learners, you’ll need to be careful to stick mainly to shapes they already know in L1. In approximate order, the easiest ones are likely to be:

“Rectangle” has two issues. One is that in many languages “square” and “rectangle” are covered by just one word, so students might need some time to get their head around the concept. Another is that there is a more age-appropriate but somewhat idiomatic version “oblong” (which I would generally avoid mentioning but of course allow if students already know it). You’ll also need to be careful at the next level, e.g. when choosing which version of the first one below to use:

Students might also be ready for more accurate descriptions of triangles such as (in approximate order) “right-angled triangle”, “equilateral triangle” and “acute triangle”.

At this point, if not before, two other issues will also probably naturally come up. One is that the adjective forms, e.g. “circular”/“round”, are quite tricky. Adjectives are also difficult to avoid, although this can be done with structures like “It is the sun. It is a circle”. Another potential problem is that 3D (three-dimensional) equivalents will naturally come up. These can be introduced along with the 2D shapes in the last section above, although again this depends on how familiar students are with the concept. The easiest are:

In order to do some of the activities mentioned below, you might also need language to describe lines such as:

How To Present And Practise Shapes

Even if you don’t specifically intend to introduce a CLIL element into your classes, most of the best activities for shapes are basically the same as you would do with kids learning the concepts and words in their usual (L1) classes. The main complication is that you could be introducing the English word “circle” to an eleven year old, in which case most of the songs and miming games that you would use in L1 are not really age appropriate. Possible activities can be roughly divided into:

It is possible to introduce shapes through one of the activities below without having a presentation stage first, but you can also drill the shapes with the help of simple flashcards, shapes cut out of coloured paper or card, or more three-dimensional shapes such as wooden blocks. Some picture books are also simple enough to be used at a presentation stage, although these are often too babyish for all but kindergarten EFL classes. The same age-appropriacy issues can also arise with simple toys such as blocks to put through the right-shaped hole and wooden jigsaws. It is always a good idea to have students miming the shapes you present, e.g. by drawing in the air with their fingers or making the shapes with their fingers, arms or whole bodies. You could try telling them what body parts they have to use each time.

The number of shapes you can present in this way is limited by the fact that students will usually take a while to learn shapes that they aren’t familiar with in L1 yet. My main approach with shapes is therefore to teach and practise lots of other language with the shapes they already know while trying to extend the shapes vocabulary by one or two words. Luckily, most of the categories of vocabulary that are in their textbooks and that they are interested in can mainly be described with a few shapes. For example, it is fairly easy to collect at least twenty foods, toys and classroom objects that can be drawn or described with just “circle”, “square”, “triangle”, “rectangle” and “egg shape”. Students can listen to a description starting with the shape (e.g. “It’s a circle. It is big. It is red inside and green outside” for watermelon) and try to guess what it is, or you can do the game the other way round and guess the shape from the object (e.g. “A ball and a globe are this shape” for circle). In the latter case, you can give students cut-out shapes as they guess them correctly and give extra points for things they can make and explain from those shapes (e.g. “Two circles can make a snowman” or “I can make a house from a square and a triangle”).

The other two activities you can do with single categories of objects are brainstorming objects with one shape, e.g. rectangular classroom objects, and running and touching real objects or flashcards stuck up around the classroom.

TPR activities include students making the shape together, e.g. by three people lying on the floor in a triangle. The whole class or large groups could also hold hands and stand in a circle, square etc (useful practice for understanding common classroom instructions), or they can “draw” the shapes on their partners’ backs with their index fingers for them to guess.

They can also listen and race to make the shapes (or an approximation of them) from pencils, pipe cleaners, Playdoh, string, wooden blocks or Lego. Drawing shapes is too simple to work as a race but you can do activities such as a picture dictation – explaining a picture that students can’t see for them to draw and identify. Something similar can also be set up with colouring by designing the worksheet so that following the written or spoken instructions reveals a picture that is not obvious before they start. Pictures can also be used in a Where’s Wally-type activity in which students need to find and label all the “large triangles”, “toys that are circles”, etc. They could also try to spot things that are the wrong shape, e.g. “The carrot is a rectangle!”

You can also play memory games with shapes. The teacher cuts out card shapes that are bigger than the flashcards they are going to use, then covers the flashcards with the shapes and tests students on which things are under which shapes with questions like “What is under the hexagon?” and “What shape is on the apple flashcard?”