EnglishClub : TEFL Articles : How To Teach Kids Numbers 1 to 10

Alex Case
Stimulating and efficient ways of teaching the basics of numbers to young learners. 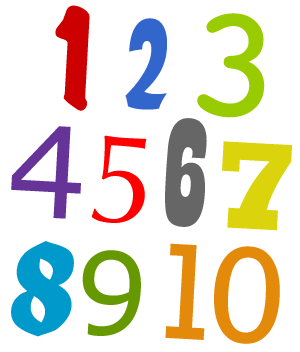 For some reason students love counting. That is lucky because numbers are a basic part of almost any young learners’ course, starting with counting up to five or ten and moving on to money, dates, times and the rest. This article is about the early stages of that process, including making this endlessly repeated topic always new and interesting. Most of the activities and advice below also work with higher numbers, e.g. up to twenty or up to a hundred in tens.

The seven stages of teaching these numbers are:

The teaching ideas below more or less follow the order above.

Counting up and down

The best activities for this are ones that engage the kids and whose actions etc give them some reinforcement of the size of the number they are hearing or saying. The simplest way of doing this is getting louder and louder as they count up, then quieter and quieter as they count down. This can be combined with actions in “Growing Numbers”, a TPR activity in which they start crouched down with their heads down and their arms around their knees for “1” and get bigger and bigger as they count until they end up stretched up high for “10”. Stepping backwards and forwards as they count also works in the same way. There are also plenty of story books and songs for counting up and down, e.g:

There aren’t many actual games for counting all the way from 1 to 10, but the teacher could stop early or make a mistake and get the students to correct them. Alternatively, they could add another challenge that makes it more difficult for students to get from 1 to 10, e.g. having to throw a ball back and forth without it touching the ground as they count, or counting as they stack up blocks to make a tower. You could also finish all classroom games when one team reaches ten points and ask the class to count the points before they go on to the next activity.

There are plenty of games where students count how many of something there is. The best things for students to count are things that are around them in the classroom. This is more fun and active if you ask them to run around and touch things as they count them in response to questions like “How many windows are there?” You can add more of an intellectual challenge to this by half hiding some of the things (e.g. staplers and boxes of crayons) around the room. This hiding idea can also be used with students sitting down by using a Where’s Wally-style detailed picture in which students must race to spot “How many giraffes are there?” by looking closely at it. A much simpler version is for the teacher to flash up a flashcard with a number of objects on it for the students to count and shout out the number as quickly as possible.

Counting songs can also be used at this stage if you use ones were the students can choose a number, e.g. ones for selecting people like Bubble Gum Bubble Gum in a Dish (How Many Pieces Do You Wish?).

Students can also run around to practise counting up to different numbers by the teacher telling them how many things they should look for and asking them to touch as they count them, e.g. “There are five in this room. What are they?”

Although they then go on to count, the last two ideas above already involve students producing or responding to numbers without necessarily counting first. In all the games below they can also count on their fingers etc but will find that learning not to need to do so will increase their speed and so chance of winning.

The simplest games are those where the teacher shouts out a number and the students respond in some way, for example:

Most of the games above can be played with the teacher holding up, writing or pointing at the word rather than shouting it out. Throwing a dice with written numbers on it is a nice variation on this. The teacher could also show word shapes, write words slowly or show words with just the important letters (e.g. F and O for 4) written in.