Meet the creator of Grammarman, the world's first and only grammar superhero 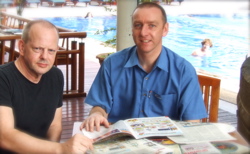 Josef: Grammarman has to be one of the most imaginative ideas I've seen in the learning or teaching English field. And the whole concept seems to be very well executed. But before we talk about Grammarman in detail, can you tell me a little about yourself?

Brian: Right now I'm teaching English with the British Council here in Thailand, but my background is British. I was doing a degree in Education at Goldsmith's College in London, specializing in design and technology with computers, and I got involved with a publisher of educational materials...with the result that I ended up working for a time on educational computer games and books for children, all built around fantasy lands and characters, and involving interactive puzzles and quizzes. My job title was "multiple media designer". But even as a child I was always drawing cartoons and comic characters. I used to photocopy and sell them sometimes, you know, the way children do. I had no idea then that one day Grammarman would be born!

Josef: So who or what exactly is Grammarman?

Brian: I like to describe Grammarman as "the world's first and only grammar superhero". He's a comic-strip character in the style of Superman or Batman. Essentially, Grammarman is a hero who belongs to a distant group of beings called the Librarians. The Librarians live at the end of time in a city suspended in Space at the end of the Universe. They're a peace-loving people devoted to the English language and they live surrounded by endless shelves of books and reference works. The Librarians sent Grammarman to Earth as a baby to take care of the English language and defend Earth from the enemies of grammar. On Earth, Grammarman lives in Verbo City. He has the ability to detect errors. He's also the world's greatest reader and can sometimes read thoughts.

Josef: And what about Alpha-bot and Syntax? Who are they?

Brian: Grammarman can't possibly defend the Earth against grammar crimes all alone! So he's helped in his mission by two other heroes. Alpha-bot is one. He's the world's smartest android. There's nothing about grammar that Alpha-bot doesn't know, and his brain works at speeds we can only imagine. The other hero, Syntax, is an unusual visitor from a distant galaxy. He originally came to Earth to learn English, but decided to stay and help Grammarman in the fight against crime.

Josef: And villains? Who are the bad guys? 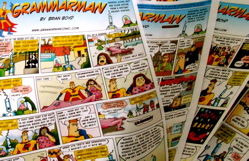 Brian: Of course, there are more villains than heroes. The Article Ants steal articles like "a" or "the". Anna Gramme is a mixed-up lady who scrambles words, but she's no match for Grammarman's superior brainpower. Then there's The Interrupter. He doesn't actually break the law but he's a real pain in the neck. Another is Uncle Uncountable who likes to use uncountable nouns in his crimes against his archenemy Grammarman. And Sammy Colon uses bad punctuation to cause confusion at the scene of a crime. There are more of course, because the battle against grammar crime is endless.

Josef: What was the idea behind Grammarman? How did it come to you?

Brian: It all started when I was having a drink with my good friend Thom Kiddle. We were talking about how Thai students love reading comics. I mean, even in class I'll sometimes find a student secretly reading some Manga comic! They read them everywhere, and at all ages. And we were thinking--if only they loved to read English comics. How about a superhero that teaches English? And really I have to thank Thom. He knew about my background in illustration and educational games and he really urged me on. And in fact he still helps tremendously, with ideas and advice. Although he's no longer in Thailand, we're always in touch by email, coming up with new exploits for Grammarman.

Josef: How do students learn with Grammarman?

Brian: Each episode of the comic works on two levels. Students can read the comic once, just for enjoyment...then each episode ends with a grammar puzzle. The reader is encouraged to read the story again looking for clues and answers. The solution to the problem is included at the bottom of each comic.

Josef: Who is Grammarman's target audience?

Brian: Really I'd say that anyone learning English could enjoy Grammarman. The language may be a little too much for very young readers, but that can be good because it stretches them. And even though it's a comic, adults love comic characters. In general, I'd say pre-intermediate and above.

Josef: Where and when does Grammarman appear?

Brian: I have a website that carries the early episodes of Grammarman. And then all the latest episodes of Grammarman are syndicated to newspapers and magazines around the world. They usually publish Grammarman once a month, though it's up to their schedule. Publications like The New Straits Times in Malaysia or The Buenos Aires Herald in Argentina.

Josef: Who or what inspires you?

Brian: It's mostly the comics that I read when I was eight years old and upward. Since then I've always enjoyed reading comics. Because of the nature of Grammarman it can't really work as a serious comic story. It tends to spoof and make reference to those comics of the 40's and 50's when it was all a lot more innocent. Nowadays comics have matured, they're more violent, more for an adult audience, but back in their heyday they were much more colourful and larger than life. Children would happily believe things like alien invasions. Nowadays Batman is very sort of dark and gritty, but back then he had a utility belt and he could always pull out all kinds of ridiculous stuff - like a fish&whatever he needed happened to be in that utility belt. So Grammarman's more like that. It sort of harks back to the comics when they were more innocent. And then another influence would be the huge amount of movies, the TV shows I've watched over the years. You can draw on all of that, when you're trying to come up with a story to fit a grammar point. It's just a wealth of stuff that you can use to your own ends.

Josef: What else do you have on your website?

Brian: The website started really as a showcase for the Grammarman comic. Apart from the early episodes of Grammarman, there are mini-biographies of each of the heroes and the villains. There's also some free clipart so students can download images of Grammarman, Alpha-bot etc and create their own stories. I extended the concept with more fun material such as interactive games, a downloadable maze book, reading resources, joke-of-the-day and puzzles. And then there's the student comics gallery. It's very creative what some of these young students have come up with.

Josef: I was very impressed by the audio. It sounds great, and very funny. How did you do that?

Brian: All the Grammarman episodes on the website have audio so that a student can read them and listen to the characters at the same time. I was able to do that because a friend of mine is a sound engineer. The sound is thanks to him really, and six or seven friends who helped out with their voices. The robot voice is me. I had to speak in a dead flat voice then my sound engineer friend made it sound electronic. He used his sound library to add lots of effects like explosions, cars screeching to a halt, audiences applauding and so on.

Josef: How do you get new ideas for each episode?

Brian: There are two approaches basically. One is to look through grammar books for a point to work on, and then think of a story to illustrate the point. And two, think of an adventure for Grammarman and then find a grammar point that would fit.

Josef: How do you actually produce Grammarman? I mean, who does the artwork and who looks after the website? How long does each episode take you?

Brian: Basically, I do the artwork alone, though Thom's a massive help with the ideas. Normally it takes about a week to produce one episode. It starts with scribbled notes for the ideas, then rough pencil sketches with the characters as stickmen, mainly to check that the text can fit the space. Then I draw outlines for each frame in blue pencil on A3 paper. Blue because it isn't picked up by the scanner later on, so those drawings can still be quite loose. It gives me freedom to make sure the images are how I want them before committing anything to a finished drawing. The next step is to go over the blue outlines more carefully in black ink. After that, I scan the drawing into the computer and use a graphics program to tidy up the black line-work further. Then, still in the computer, add colour, shading and shadow to give a more 3D effect. The next step is to add the text balloons and the text inside them. And finally the title bar finishes it all off. Another friend of mine has been a great help with the website, though I'm learning how to take care of that more and more.

Josef: What feedback have you had? All positive? Any negative?

Brian: Mostly good. Very good really. Most of the emails I get say things like great idea, my students say it's fun. Teachers often write to say they've use Grammarman in class. It's a great thrill to get feedback from around the world from people I've never met and who are enjoying my jokes and stories. But I'm also pretty sensitive, so I cringe a bit when I get the occasional negative comment. I also have to be on the lookout for any real grammar mistakes because some people would be only too happy to point out errors. Fortunately I've got Grammarman to help me.

Josef: What plans do you have for the future?

Brian: Lots! Based on the current episodes of Grammarman I have plans for a collected volume, probably in book and, hopefully, CD form with audio. And then I'm also working on a Grammarman board game and Grammarman card game. I think they will be fun. When I have more time I'd like to find someone willing to produce a Grammarman computer game and some animated cartoons. And another idea is a Grammarman Fun Book on "fun" English, you know, quirky things like silent letters and palindromes&