Talk about travel, tourism and your holidays.

Ok I guess it's my turn. I have never explained to you where I am from neither showed you any pictures of the place I live, beautiful as it is.

Here's a map of Spain, with Catalonia in red:

And this is Catalonia:

And our flag, la senyera: 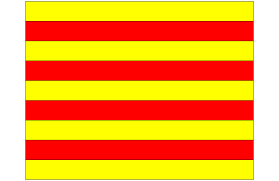 This is south Catalonia, the river Ebre delta.

This is a beautiful image of the delta: 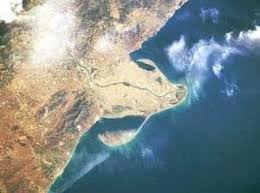 Ok, this is my town... It's between the mountains and the Mediterranean sea, which makes it a little special.

The typical food of Sant Carles de la Ràpita, my hometown, is, and as you may have already guessed, is...

Something really beautiful and a must visit is the Delta! This is a natural park with hundreds of different bird species.

Rice is grown in the zone surrounding the delta:

What do you think so far? Are you enjoying the visit? Maybe I provide you with more images later

frengo wrote: Which period of the year do you suggest? Not too hot please...

Definitely, NOT summer!! It's really crowded with tourists, especially from Spain and France.
Top

it is really very nice,,,, you know spain is one from my list for my future trip.

The delta of the Rio (River) Ebro, formed by silt brought down by the river, sticks 20km out into the Mediterranean near Catalunya's southern border. Dotted with reedy lagoons and fringed by dune backed beaches, this flat and exposed wetland is northern Spain's most important water bird habitat. The October through November migration season sees the peak bird population, with an average of 53,000 ducks and 15,000 coots, but they are also numerous in winter and spring. Ten per cent of all water birds wintering on the Iberian Peninsula choose to stay here.

Greater Flamingos are the delta's most spectacular birds. Almost 2000 of the birds nest here, and since 1992, the delta has been one of only five places in Europe where they reproduce.

Early morning and evening are the best times for bird watching.

Boat trips along the river run daily but the frequency depends on the season.

Nearly half of the delta's 320 sq km are given over to rice growing. Did you ever wonder where the delicious Valencian paella rice originates from? It is fascinating to tour around the delta seeing the lush rice fields, full of water, that surround the rice farms. It really is a quite remarkable place to visit.

Some 77 sq km, mostly along the coasts and around the lagoons, form the Parc Natural Delta de l'Ebre. The 5km long and sandy Platja de l'Eucaliptus beach at the northern end of the delta remains unspoilt by tourism with only a few properties, that have been recently constructed, a couple of bars and restaurants and a campsite. It is still possible to lie on Eucaliptus beach all day with only nature and tranquillity around you.

I would like to live in a place like that. Is the University in that town or you have to travel to another city.
You mentioned that you live with a roomate. Where your family live, near of that town.
México is a very big city, when I used to live alone every friday I used to go to visit my sister and Dad, because I live in the south of the city and them in the central area. An hour in the public transportation. In fact at México people have to use an hour in transportation to their offices or work places, or universities.

I like sea food very much, but I can´t eat it. Only a little fish. I can´t consider that action like a crime because I´m a fish, then I should eat fish,even if I´m a vegetarian fish

Is the University in that town or you have to travel to another city.


No, the university is in Tarragona, 100km north, but, Elba, I am a graduate person now ;) Hehehe although I do go to my college to use the computers room :D:D:D:D


Elba wrote: You mentioned that you live with a roomate. Where your family live, near of that town.


My family live here, and I live in Tarragona with three more girls: a friend of mine, who is an English teacher, too, and two young, annoying girls.
Top
Post Reply
8 posts • Page 1 of 1