This is a non-obligatory assignment that I'm completely stuck at. Here's a screenshot of my failed attempt: 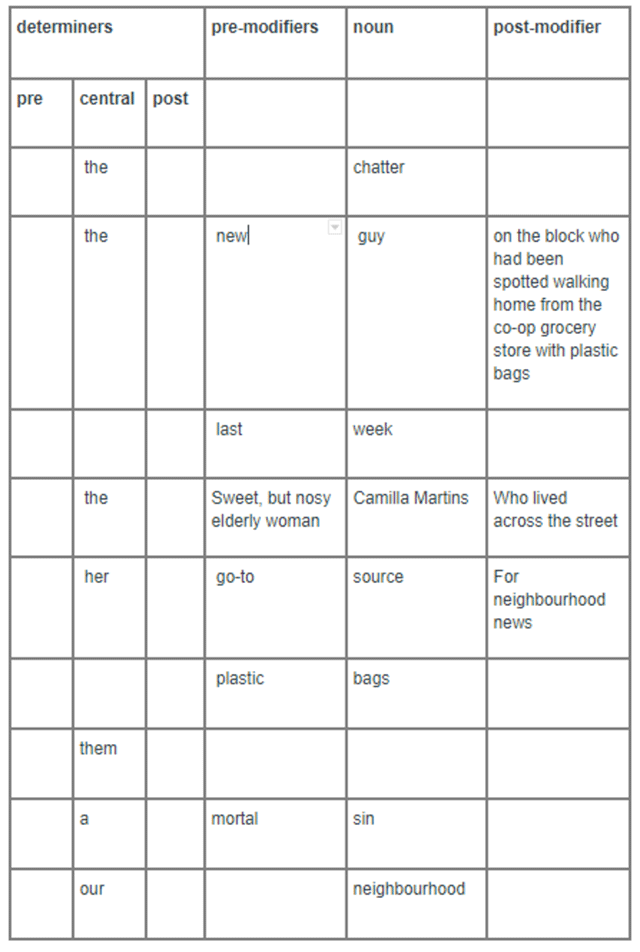 I've made failed attempt (or so I assume) at the task. I understand the general idea of determiners, modifiers, etc. in noun phrases, but these are far too difficult for me, and I've been unable to find any information through textbooks or otherwise that just made it "click" for me.

The bold phrases below are the ones we're supposed to look at:

I had a feeling that I knew what the chatter was about. The neighborhood had been fuming about the new guy on the block who had been spotted walking home from the co-op grocery store with plastic bags! Talk about a controversy. Last week, the sweet but nosy elderly woman, Camilla Martins, who lived across the street, had stopped me before I left. She waved a pair of gardening sheers. "Come over here. I have a story for you." Mrs. Martins seemed to think that I was her go-to source for neighborhood news. "You know that young man who moved in two doors down?" She snipped an opaque pink rose. I nodded. She narrowed her eyes. "He's using plastic bags. Plastic. How did he even get them?" "Good question, Mrs. Martins." I tried to match her grave expression. Portland banned the use of plastic bags in grocery stores a couple of years ago. The possession of plastic bags was a mortal sin in our neighborhood.

Re: Please help me understand how determiners, pre-modifiers, nouns and post-modifiers work in noun phrases

Would this help you?
https://www.englishclub.com/grammar/det ... -order.htm
"We are not wholly bad or good, who live our lives under Milk Wood :-| " — Dylan Thomas, Under Milk Wood

Return to “Help Each Other with English”