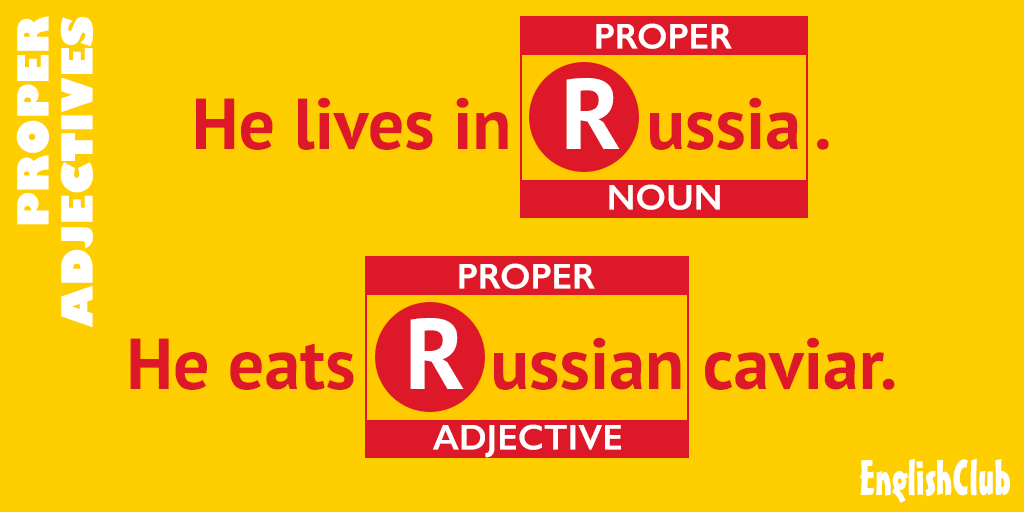 Each of the four examples above contains an adjective (Trumpian, Shakespearean, Thai, French) and you will immediately note that each adjective is capitalized—it starts with a capital letter. That is because each of those adjectives comes from a name (Trump, Shakespeare, Thailand, France). Names of people, organizations, countries, towns etc are "proper nouns" and need to be capitalized in English. Adjectives made from proper nouns are "proper adjectives" and also need to be capitalized.

Proper nouns are nouns that refer to unique places, people or organizations. The word "country" is a common noun because there are many countries. The word "Thailand" is a proper noun because there is only one Thailand and Thailand is its name. Just like you. You are unique and you have a name. Your name is a proper noun and in English we spell it with a capital letter at the start (example Elizabeth, Donald).

What are Proper Adjectives?

Most adjectives are "common adjectives". They describe people, places and things, for example:

Normally, a prefix attached to a proper adjective should not be capitalized. Look at these examples:

Note that the prefix should not be capitalized, unless it starts the sentence:

The same logic applies with suffixes and other hyphenated forms—capitalize only the word or words derived from a proper noun:

When Proper Adjectives Lose their Connection

Sometimes proper adjectives lose their connection with the proper noun that gave them the right to be capitalized, for example: