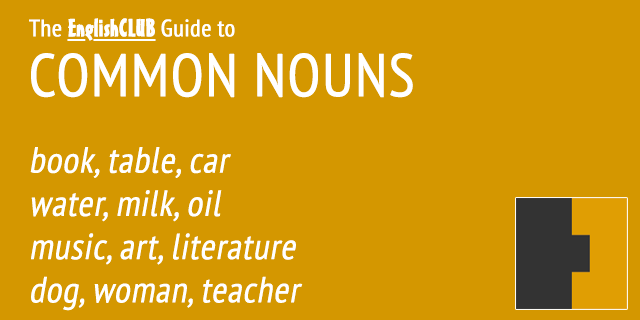 There are MILLIONS of websites, and the word "website" is a common noun.

There is only ONE Google, and the word "Google" is a proper noun.

A proper noun is the name of something unique, like me (Joe). You can learn about proper nouns here.

This page is about common nouns, which are all the "normal", general nouns. Simple examples of common nouns are:

Common nouns are everywhere. Look around you now and you will see many common nouns:

Common nouns can be countable (bottle, dollar) or uncountable (milk, money); singular (desk, pencil) or plural (desks, pencils); concrete (piano, bed) or abstract (music, happiness). And they follow all the usual rules of countable/uncountable, singular/plural, concrete/abstract nouns. But there is ONE rule that ALL common nouns need to follow: they don't start with a capital letter!

A typical mistake that people make with common nouns is to capitalize them. But remember, only a proper noun (like your name or title) needs to start with a capital letter. A person's "job" (chairman, president, king/queen) may or may not need capitalisation. It depends whether it is the "position" or the "title". There have been many presidents of the USA. Those are positions. But there is only one President Trump. That is his title and name.

If a common noun occurs in a heading (for example above, Common Nouns Don't Need Capitals!), then it may get a capital letter (depending on editorial style).

If a common noun occurs in the title of a book, movie, song, album etc, then it usually gets a capital letter (War and Peace, The Lord of the Rings, Night of the Living Dead, The Host, The College Dropout).

Of course, if a common noun occurs in a heading that is all in capitals (e.g. newspaper headline), then it is capitalized (MAN BITES DOG, CONTINENT CUT OFF BY FOG).

Here are some example sentences showing right and wrong use of capitalization: