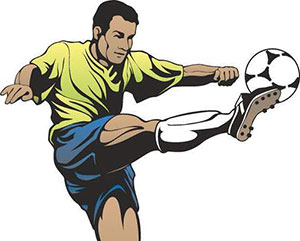 The normal order of an English sentence is subject-verb-object, like this:

In the above sentence, the action or verb is "kicked". The subject (He) performed the action (kicked). And the object (the ball) received the action.

Notice that in all the above cases the subject is "doing" the action, and the direct object (D.O.) is receiving or undergoing the action.

A direct object can be one word or several words. It can be:

We use Direct Object with transitive verbs only

DO NOT use Direct Object with linking verbs

Verbs like be, seem, smell, taste do not express action. Instead, they are like an equals sign (=) in mathematics. They are linking verbs. Look at these examples:

How to find the Direct Object

To check whether a direct object (D.O.) exists in a sentence, and to identify it, ask "what?" or "whom?" about the verb.

If Direct Object is a pronoun, the pronoun must be in objective case

Remember that pronouns can have subjective and objective case, like this:

When the direct object is a pronoun, the pronoun MUST be in objective case. Look at these examples:

The interrogative pronoun who also has an objective case: whom. But note that English speakers often say who, even when whom would be grammatically correct. So, for example, you will often hear sentences like "Who did she tell?" spoken by native English speakers. BUT you will never hear sentences like "She told I" or "John helped they" spoken by a native speaker. Personal pronouns used as objects MUST be in objective case.

Phrases and clauses can be Direct Objects

As indicated above, a direct object doesn't have to be a single noun or pronoun. It can also be a complete noun phrase, a phrase or a clause. Look at these examples:

Many famous song titles include a direct object. Here are a few. Can you find more?