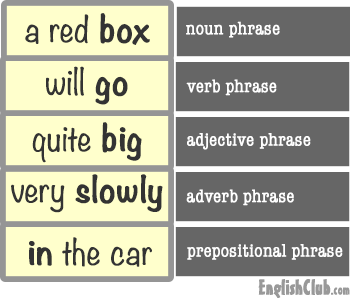 A phrase is one or more words that form a meaningful grammatical unit within a clause. There are five main types of phrase in English, as below.

A verb phrase (VP, also called a "verb group") consists of a main verb and its auxiliary verbs (including modals), for example:

A prepositional phrase consists of a preposition followed by its object (usually a noun phrase), for example:

The table below shows all five phrase types used in a single clause:

Note that the word "phrase" can also mean any short group of words such as EnglishClub's "because people speak English" and other company mottos, as well as expressions typical of idioms such as a piece of cake, back to square one and caught red-handed.