It was just over one year ago that I started work on The Learning English Video Project and I have to say that I am thrilled with how everything is going so far. The support I have received from YOU, the audience, has been spectacular and I have really enjoyed reading your feedback since I began the blog posts in August 2008. END_OF_DOCUMENT_TOKEN_TO_BE_REPLACED

Firstly I would like to thank everybody at English Club for their comments and support over the last few months. Your input has made the project worth all of the hard work and I sincerely hope that you enjoy the films we have been putting together.

I would also like to thank everyone who has invited me to Iran, Chile, Tunisia, Indonesia, Argentina, Cameroon and many other countries around the world in order to produce more films. Since the project began, I have received so many invitations it is difficult to keep count…

Due to the phenomenal feedback that we have had, Englishclub.com has announced that it will sponsor The Learning English Video Project so that we may make two more films; later on this year, I will continue the project in both China and Brazil!

Pre-production will begin in May 2009 and I will let you know when I can confirm exact times, dates and locations for the filming schedule.

In the meantime, the first episode of The Learning English Video Project; ‘Stories from Morocco’ will be available to watch FOR FREE on www.englishclub.com from April 21 2009!

I hope you enjoy the film and I look forward to reading your comments.

First of all I would like to extend a huge thank you to all who have taken part in the EnglishClub.com video project diary. It has been a real inspiration reading all of your comments and replies – all 1400 of them!

As you may have gathered, the filming stage of the project has come to a close. All that remains now is a LOT of editing. In the meantime though, it would be fantastic to keep in contact with the regular contributors and keep the video blog alive. I have therefore decided to ask your personal opinion on all of the video blogs that have been posted so far.

END_OF_DOCUMENT_TOKEN_TO_BE_REPLACED

IN JANUARY 2009, ENGLISHCLUB.COM WILL HOST A FREE DOCUMENTARY VIDEO AND LEARNING AIDE.

THIS PAGE WILL GROW TO BE A REGULARLY UPDATED FEATURE ON THE PROJECT PROGRESS.

Welcome to my digital diary and pseudo-aesthetic medium for detailing the events leading up to the release of an international collaboration and enormously compelling documentary film project. 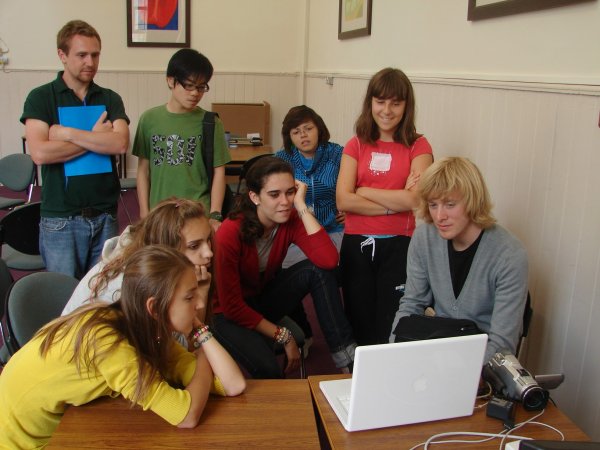 I am an independent documentary filmmaker and language enthusiast from the United Kingdom. I also teach a combination of EFL and practical film making (see picture above – taken at Millfield Summer School 2008) and for the last five years, film production has been one of my central passions. I have worked for several production companies throughout Europe and have since been undertaking independent ventures that subjectify another of my prime interests; language.

Organisations, individuals and other collaborators from Africa, America, Western Europe, Great Britain and far Eastern Europe are preparing to take part in a documentary film project examining the various strategies, ideas and inspirations behind learning English as a second language. Why is English so popular, what does it mean to be able to speak it, and above all, what are the best ways of learning? Over the course of the next few weeks, I hope to provide an educational and entertaining insight into the learning habits of ESL students all across the globe. Accompanied by my close associate and dedicated co-producer Joel Carr, I will be living with people from the cities we visit in an attempt to establish a true sense of place and cultural identity.