I would like to thank the American Academy Casablanca for their incredible assistance with the documentary project. Not only did the school allow us to spend three full days filming on location with them, but they also provided us with a wonderful selection of enthusiastic ESL students with some fascinating ideas about learning English.

Although Morocco is only a short distance away from the southern coast of Spain, the change in culture and climate is truly breathtaking. Upon arriving in the busy city of Casablanca, we were ripped off tremendously by our taxi driver and taken straight to the Medina (a vast labyrinth of market stalls, booths, flats and washing lines). We were  immediately swarmed by reckless hands and fake Rolex watches, beaming faces and bootleg DVDs, a real maze of Moroccan craftsmanship. We started to walk down one of the twirling isles and we were pounced upon by a tall burly fellow with glasses ¨hello my English friends¨ he said with a berserk sense of confidence, ¨let me give you a private tour…¨

This was our introduction to Morocco and the shape of things to come. Desperately friendly people with a lot to share, but at a somewhat questionable price. It was not until we reached the haven of the American Academy that we felt we could let our guard down somewhat and give the project our full attention.

Posing with some AAC students. 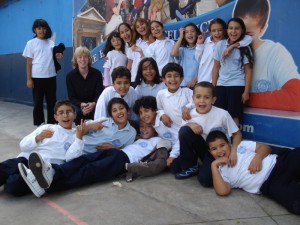 An interview with Michelle from the Congo. 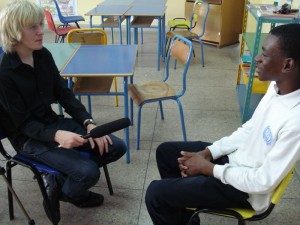 The reason for my choosing Morocco as a chief destination for the ESL documentary project is that it is extremely unique. Situated in the north of Africa and with an increasing tourist trade, the Moroccan people seem to be looking at increasing their bilingual standard into a trilingual language powerhouse. The students that we visited at AAC spoke fluent Arabic and French, but also need to learn English to a fantastic degree in order to be able to graduate. This is a massive task and would seem extremely daunting to most people, but the students and staff we met at AAC were doing extremely well indeed.

But how are they doing it!? Why is it important for an Arabic/French speaking nation to learn English!? Do they have a different technique to the rest of the world!?

The folks we interviewed at AAC were able to answer all of these questions and more. I just cant wait to get this section of the project online so that everybody can see the results for themselves. Keep checking the blog for more information, videos and pictures.

A protest march in Rabat. 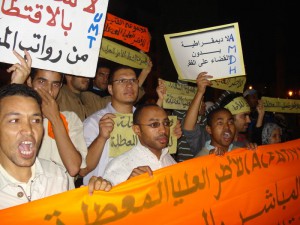 Behind the camera in Casablanca. 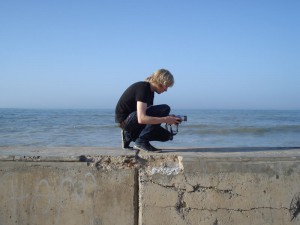 This project has been extremely difficult to plan. There is no question about it. I am surprised myself that the project has gone off without a hitch so far and I am putting that down to the fabulous organisations that we have had to work with so far; Michael House and the International Club in Cambridge, LSI in New York, IML in Granada and American Academy Casablanca in Morocco.

I am sad to report however that our plans to visit Minsk in Belarus have been put to a standstill. Due to some difficulties in obtaining VISAs, we are having to shift Location 05 to a different country. This is a real shame due to the fantastic responses that we have had from students in Belarus so far – I was desperately looking forward to meeting our contacts in Minsk but sadly we are going to have to postpone our trip until a later date.

I am however pleased to report that we were easily able to change destination with the help and support of Englishclub. On October 26th, Joel and I will be heading to our new project destination number five…

Best Regards to everybody and another massive THANK YOU for all your contributions.