Today was our final ‘full day’ in Brazil! Tomorrow we shall head to the airport at 15:00 and say farewell to South America for the time being. It has been a phenomenal experience to say the least and I am so excited about working on both the Shanghai and Sao Paulo films in order to share what I have learned about the English language while travelling across these two drastically diverse continents.

Due to last night being our final Saturday in Sao Paulo, Joel and I joined a group of people from Rio De Janeiro at a Samba nightclub. I shall divulge more information as to what occured in my Sao Paulo write-up later this month… However, evening soon turned into morning and we did not  start filming until mid-day on this, our final afternoon in Sao Paulo!

After a quick breakfast at one of the local cafes in Pinheiro, we took a taxi to Ibirapuera Park with a German architect we had met at our hostel. She proved to be a great help in that she knew the park well and was able to show Joel and I the best places for filming the various activities that were taking place. We stayed in the park until the sun went down, filming everything from kite flying to skate boarding as the Brazilian’s made the most of their free time by relaxing in the summer warmth. 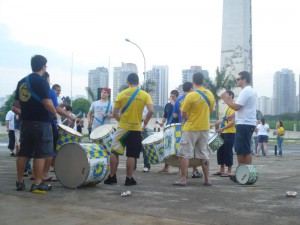 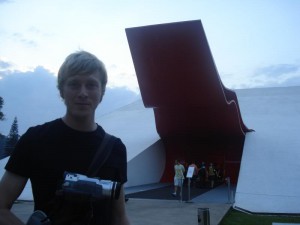 Filming at the Ibirapuera Auditorium

We managed to get some more great footage from the park that I feel well and truly reflects the (surprisingly) relaxing ambiance of Sao Paulo on a Sunday. To contrast today’s shoot, Joel and I will head to Avenue Paulista tomorrow in order to capture some of the frantic Monday morning rush at one of the busiest business districts in the city!