We woke up early and had breakfast at the hostel, the idea was to drink as much coffee as possible in order to remain alert while filming in the city centre of Sao Paulo. Both Joel and I had been warned that this would not be an easy thing to achieve due to the amount of crime in the area, but we were both determined to get some footage of Sao Paulo Cathedral. We walked from Vila Madalena through the busy streets up to Clinicas metro station where we bought our tickets and submerged into the depths of the underground.

As with any major city in the world, the tube was busy; we were pressed together tightly as the underground train propelled us towards the city centre. After arriving at Subprefeitura da Sé, we began to make our way to ground level. Masses of people surrounded us but we felt no initial concern as to our well being; having filmed at many busy locations around the world before, Joel and I were both confident that the warnings we had received from the local people we had met were perhaps exaggerated a little. Upon embracing the daylight and being slightly taken back by the beauty of the cathedral, I reached for my tripod. Within seconds of me taking it from my bag, we were surrounded. A group of men advanced on us right outside the metro station and we had to make a run for it. I felt torn between my desire to capture the action on film and the need for me to keep my camera! We made it about thirty metres across the square when we found ourselves witnesses to a mugging; an angry man had a pick pocket pinned up against a wall and was demanding his wallet back. We ran in the opposite direction, taking cover in a fast food restaurant called ‘Giraffes’.

I got some footage of the centre from the second floor of the restaurant window, but I was still unable to get a good shot of the cathedral. We walked back to the central plaza and lingered in the market place for a few moments before Joel was pestered by a man on the pavement. My dear friend and dedicated cameraman continued to receive abuse as we walked back down the metro stairs and took the underground train back towards Vila Madalena.

The morning’s affairs were disappointing, but The Learning English Video Project crew like to draw on the positive side of things and we found that our experience in the centre gave us more courage with filming around the areas we had already explored. We disembarked the metro one or two stops before Clinicas and took some footage of the Sampa Skyline at one of the biggest cemeteries in the area. We were also able to walk through the Vila Madalena neighbourhood and get a fantastic collection of stills celebrating the Sao Paulo graffiti culture. As the sun went down, Joel and I conducted an interview with Tulio, the owner of our hostel, about the importance of English in Brazil’s tourist trade before shooting some footage for the project video blog. 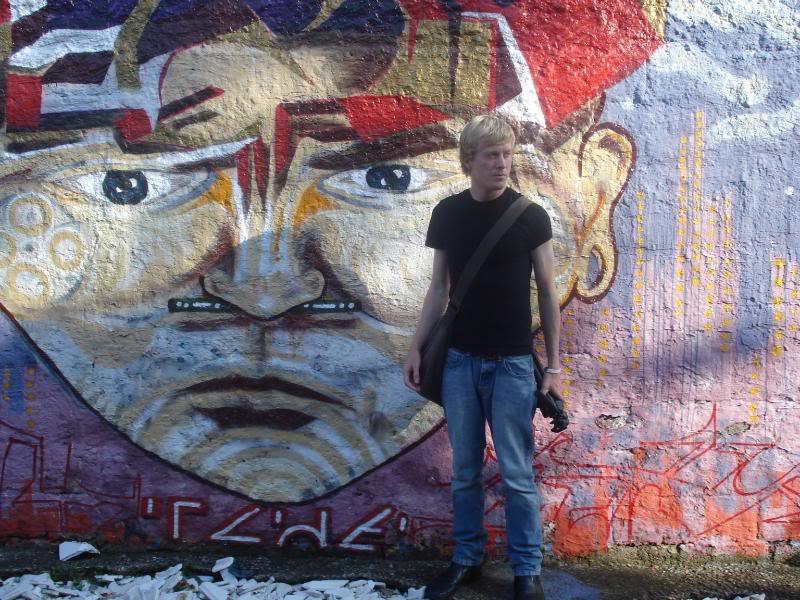 There is still a huge amount of footage we need to get from Sao Paulo, the only problem is finding out the best way to get it! Tomorrow we will travel to the Butantan Institute in the morning and hit one of Sao Paulo’s famous street markets in the afternoon. Keep checking the website for more updates!