It has been a long and productive week in Shanghai. Over the course of the past few days we have interviewed almost every senior manager and a fair few other members of staff at China’s first low cost airline company. Joel and I have also had the opportunity to visit some of Shanghai’s highest buildings and busiest markets. Tomorrow we will fly to Xiamen to get some shots of a different city in China and wind up the project video blog. We will return to Shanghai on Saturday afternoon for another day’s worth of filming in this amazing city before heading back to London for a few hours on Monday. We will then be flying to Sao Paulo on Wednesday!

The Spring Airlines fleet is made up entirely of Airbus planes. We spent all morning interviewing several people involved in the safety management of Spring Airlines, which provided new insights into ESP in China. We then interviewed the safety department team leader about the various levels of English spoken by employees at the airline company. Our afternoon was equally productive in that we were able to interview the CEO at Spring. She has had to learn English from scratch over the course of the last eighteen months and her interview proved to be both insightful and entertaining! I was astonished to find that she had learnt English so quickly and that since she began she has made speeches, in English, at several major international conferences. The CEO makes everything happen at Spring in terms of English language lessons so it was great to be able to find why she thinks English is so important for her staff.  We then conducted our first interview in Mandarin with the company director, a cracking gentleman who allowed us to interview him during his very busy schedule. 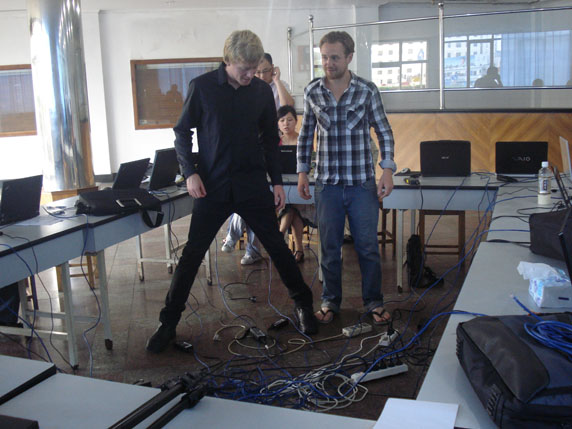 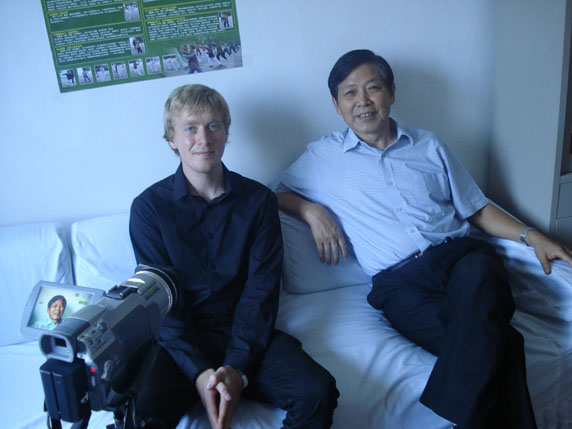 As well as conducting a host of interviews with people of different occupations and levels of English in Shanghai, I also thought it would be a good idea to get some footage of the staff in action. Joel and I spent Tuesday morning persuading some of the air stewardesses to give us a few demos as to how they run through the safety features of the aircraft before take off. I have now begun to fully understand the training and preparation that goes into making these announcements in a foreign language and I think it will change the way that I fly forever! We were then able to interview the lady in charge of all the cabin crew. She proved to be a natural in front of the camera and a gave The Learning English Video Project a few lessons as to how business is really done in China! As soon as we finished at Spring in the late afternoon, Joel and I took a cab across town with Denis (the Brazilian chap we interviewed on day 03) and took some shots of the city as the sun went down. I simply can not stress just how impossibly huge Shanghai is… 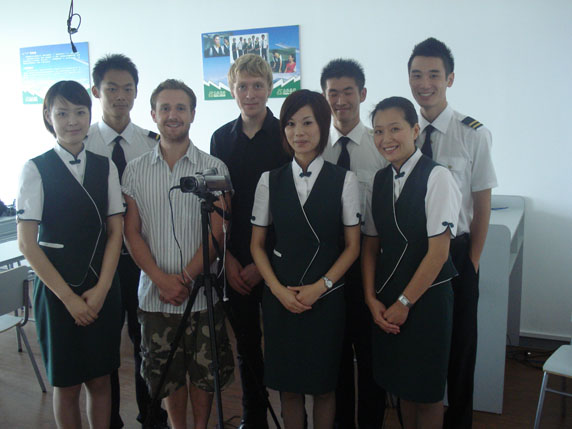 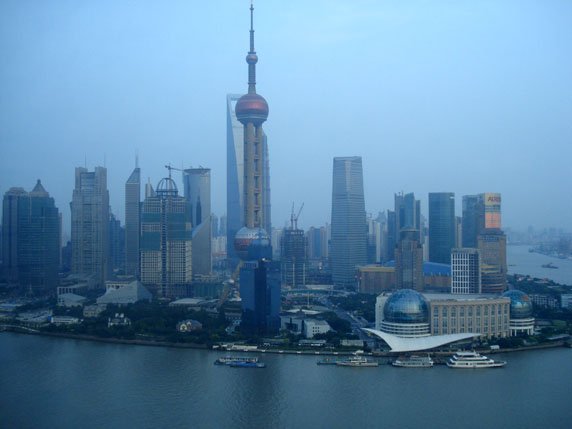 Joel and I were met at the front desk of our hostel by Tony, our central contact at the company and Peter, one of the most important members of the Spring team, who took us on a whirlwind tour of the city in order to capture some scenic shots of Shanghai. Our first stop was the second highest building in the city, where we were given VIP treatment and presented with some breathtaking views of the city. A banana smoothie later and we found ourselves at one of the busiest market places in the Orient! The shops, restaurants and cafes are mangled amongst a multitude of scenic buildings, lakes and trees in one of the most exciting parts of the city I have seen yet. We were able to get some great shots of the crowds and the architecture in 36 degree C. temperatures before returning back to our temporary dwelling across the other side of town. 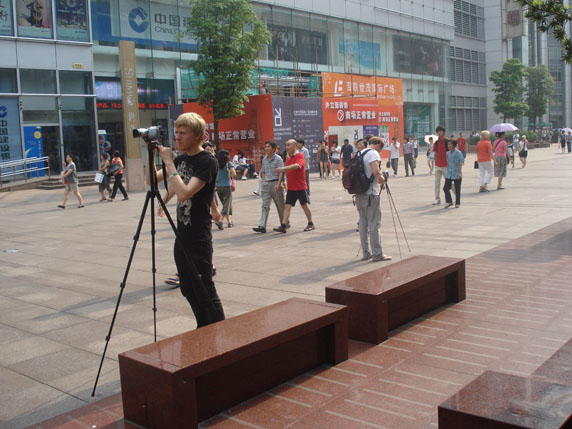 An attempt was made to shoot some footage of the local people ballroom dancing in one of the many parks in Shanghai… However, when the temperature rose to just under 40 degrees C., this became almost impossible. We retired to the shade until it was time to visit Spring and interview some of the young IT staff. It has been incredibly interesting to find out about the Chinese perception of English from so many different people. It seems that every member of staff has their individual take on what English means to businesses in China and how trade is effected by language.

So that almost brings me up to date as far as the blog is concerned. I am really pleased to see that people have been reading the posts and leaving responses. Please do take the time to continue as it adds an interactive element to the project that would otherwise be impossible. I really hope that you are enjoying the blog and that you will continue reading over the course of the days and weeks to come.

I look forward to hearing from you soon!