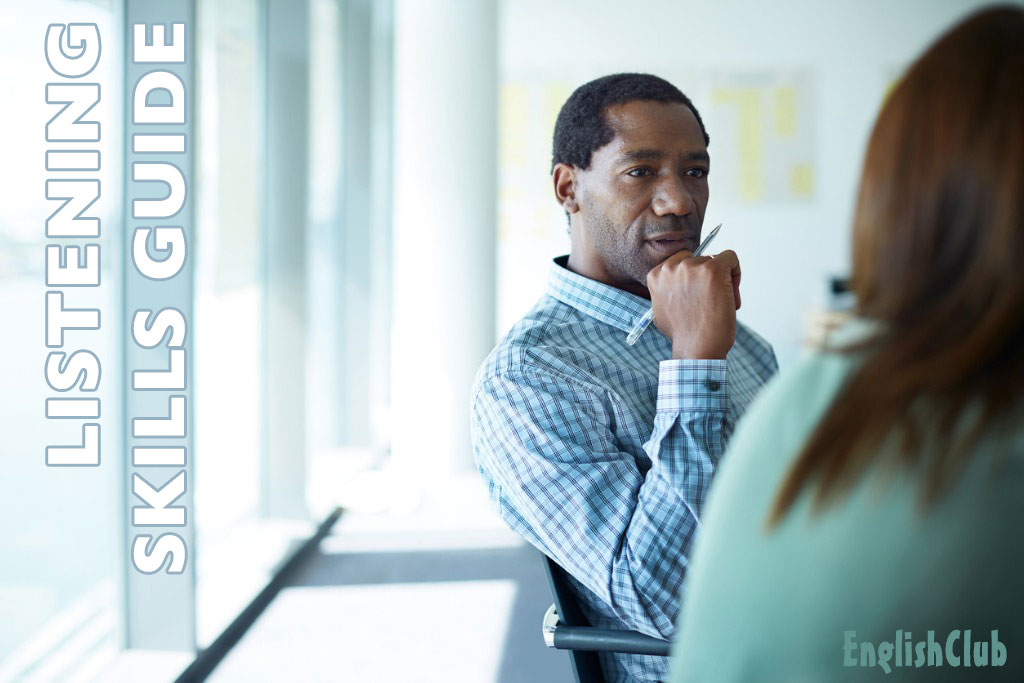 Would you like to improve your English listening skills? Good listening doesn’t just come naturally (unless you were born listening to English). We need to make a special effort to work on our listening skills.

In this listening skills guide you’ll learn about:

You can also look below at the listening glossary for any words about listening that you don’t understand, or try our Listening Terms Quiz.

Listening is the first of the four language skills. It is called a "receptive" skill because when we listen we receive language coming in:

Differences between hearing and listening

Hearing is simply the physical act of sound waves entering our ears and being transported to our brain. This is a passive process that requires no effort. No meaning is attached. If your ears work and you are in a place where sound is being transmitted, you will hear it. Listening is an active skill. It requires effort, and you can choose not to do it. Listeners take sounds and attach meanings to them. If they comprehend what a speaker has said, they can interpret and respond to the message. This is called active listening.

What to listen to

If you have Internet and a device (computer, tablet, phone) with sound, you will never run out of English listening material. Here are some suggestions for finding appropriate materials. If the listening level is too high and you don’t understand anything, find something easier.

Podcasts: Podcasts offer regularly updated episodes of listening bites. These shows may be short or long. They may be formal or informal. They are often organized around a certain topic. Podcasts are typically free. You can find many that are specifically made for language learners. You don’t need an iPod to listen to podcasts. You can often listen to podcasts online. If you have a mobile device or MP3 player you can also subscribe to podcasts and listen to them on the go. EnglishClub has a podcast that you can subscribe to.

Online listening labs and sites: Many websites like EnglishClub offer free listening activities. Some are organized by topic or level. You can also search EnglishClub’s links to find sites that offer free audio. Or use the search terms “free audio practice” or “free English listening”.

News: Many English news sites offer audio or video clips to go with news stories. If the English is too difficult for you, find a site that offers news in easy English, such as EnglishClub’s monthly news or other sites that specialize in news reports for English learners.

Music: Listening to music lyrics is a great way to practise your active listening. At times you will have to replay one line over and over until you can understand what the singer is saying. Many lyrics are available online so you can read along as you listen. You can also search for music videos that have subtitles.

Videos/Film/TV: Find a topic you are interested in and start watching videos. You can watch English cartoons, how-to videos, documentaries or movies. Why not watch one each day? Some videos offer captions. You could also buy a TV series on DVD so that you can control when to pause, stop, and replay certain scenes.

Dictations: Improve your spelling, writing and typing skills as you practise listening. Dictations can also help you learn new vocabulary in context. EnglishClub offers dictations for different levels. You could also practise dictations with a partner. Choose readings at an appropriate level and practise reading slowly with proper pronunciation.

Conversations: If you are in an English-speaking country, instead of texting in your own language on the bus or train, fold your hands in your lap and listen to the conversations around you. You can also sit in a coffee shop or restaurant and practise listening to strangers around you. This is called eavesdropping. Stare out a window or pretend to read a book so that others don’t feel uncomfortable. This is the one time not to make eye contact.

Lectures: Many online schools offer free lectures on a variety of topics. You can also listen to TED Talks.

10 Tips to be a good listener

Here are some strategies for improving your listening skills:

Listen to natural speech: Listening to your teacher, your classmates and even the audio recordings from your textbook is not enough. You also need to listen to real people speaking real English. You will notice the following:

Most standardized tests have a listening component. You will score higher on the test if you can anticipate the types of questions you will encounter. You may or may not be allowed to take notes as you listen. This depends on the test and the teacher or moderator. Be sure to know the format and time restrictions of the test before you take it.

Here are some specific types of questions you may come across:

Question response: You hear one statement or question and you have to choose the next line from a second speaker or respond with your own voice.

Detail: Answer who, what, where, when, how, why questions about what you heard.

Inference: Draw your own conclusions about what you heard.

Pictures: Listen to statements about a photograph. Determine which one best describes the image.

Oral response: Listen to a recording and respond to a related question with your voice.

accent (noun): how words and syllables are pronounced based on the regional or social background of a speaker
active listening (noun): taking in sounds and attaching meaning to them
audio (noun): sound
barrier (noun): something that blocks or reduces your ability to do something
bias (noun): a preference for one over another often due to emotional ties or relations
body language (noun): communication via gestures and facial expressions
caption (noun): text that informers a viewer what has been said
clarification (noun): the act of making something clear that was previously confusing
comprehend (verb): to understand
dictation (noun): a process of recording in writing something that has been spoken
distraction (noun): something that takes one’s attention away from a focal point
documentary (noun): a non-fiction show or film that often tells something historic, social or political
false start (noun): a word or phrase a speaker uses and then rewords for clarity
gist (noun):  the main point
hear (verb): to have sound enter your ears
idiom (noun): useful expressions that usually cannot be understood by defining the separate words
inference (noun): a conclusion the listener reaches based on what has been heard
interrupt (verb): to start speaking or asking a question to a person who is already speaking or engaged in an activity
iPod (noun): a type of mobile device that can be used for listening to audio files
lecture (noun): a planned speech that is educational in nature
listening lab (noun): a place such as a room full of computers where students listen to preselected audio materials
lyrics (noun): written words that go with a piece of music
mobile device (noun): hand-held communication technology such as a phone or MP3 player
MP3 player (noun): a device for playing and listening to downloadable audio files
paraphrase (verb): to reword in one’s own words
pause (verb also noun): to take a short break between words, phrases, or paragraphs
podcast (noun): a regularly updated listening episode that you can download and listen to on the go
point of view (noun): the speaker’s attitude or belief on a subject
prediction (noun): a guess about what will happen in the future
standardized test (noun): a test that is formatted and scored in a specific way and is used to determine a person’s level of ability
subtitles (noun): words that scroll across a screen to indicate what a narrator or speaker is saying (may be in another language)
transcript (noun): the full written version of something that you can listen to
transmit (verb): to send out