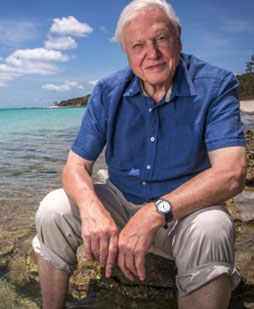 Do you like watching shows about nature and wildlife? If you do, you've probably seen documentaries by British naturalist Sir David Attenborough such as his famous Life on Earth series. By producing these documentaries, David has helped millions of people all over the world to appreciate the wonders of nature and to understand how damaging pollution, habitat destruction and climate change really are. To mark the release of a new Netflix film about David's extraordinary life, we've made him the subject of our latest reading on environmental activists. But before reading, why not learn the vocabulary in Wordchecker? Then watch the trailer and complete the gapfill exercise before reading on. And don't forget to check your understanding by doing the David Attenborough quiz.

Above right: Sir David Attenborough while filming at the Great Barrier Reef in Australia. CC BY 3.0 AU

Video: Trailer for David Attenborough: A Life on Our Planet, a documentary film about the life, work and thoughts of the famous British naturalist and TV presenter is now available on Netflix.

Watch the trailer and listen to David's narration. While listening, complete the transcript below by filling the gaps with the following words:
disaster | extraordinary | overrun | put it right | the wild

(Check your answers in the Gapfill Exercise Transcript below.)

David Attenborough was born in 1926 in London, England. His father was the principal of University College where David and his two brothers lived. As a young boy David explored the natural world and was fascinated by the level of biodiversity he discovered. He loved collecting fossils along with insects, frogs and other small creatures, and before long he was showing people around his own "museum" and telling them about each item. In a way, this is what he would do for the rest of his life, but on a much larger scale.

After finishing secondary school, David studied geology and zoology at Cambridge University. By studying both a physical science and a life science, he came to understand the importance of using both branches of science when figuring out how the natural world works. After graduating he worked for a publisher of science textbooks before deciding in 1950 to apply for a job with the British Broadcasting Service (the BBC), a decision that changed his life forever.

David produced his first TV programme for the BBC in 1951. It was a short documentary on an order of prehistoric fish that's still part of today's natural world. His first series of wildlife documentaries was Zoo Quest in which he showed viewers some of the world's most amazing creatures in their natural habitats. The series ran from 1954 to 1963 and included a popular six-part series on New Guinea's spectacular birds of paradise.

Video: David Attenborough in the 1961 BBC documentary Zoo Quest to Madagascar. In this clip he's searching for fragments of a giant egg laid by the now extinct Elephant Bird (Aepyornis).

In 1965, David became the controller of the BBC's second television network, BBC Two. He reinvented the network by ordering the production of a wide range of new programmes covering music, the arts, entertainment, comedy, travel, drama, sport and science, including his own field of natural history. He also ordered the production of two of the greatest documentary series ever made; Kenneth Clark's Civilisation and Jacob Bronowski's The Ascent of Man. After briefly taking over as director of programmes for both BBC One and BBC Two, he resigned in 1970 and returned to making documentaries, his true passion.

After producing a number of short documentaries, David began work on a major 13-episode series for the BBC called Life on Earth: A Natural History in which he tells the story of life's evolution over millions of years from single-celled organisms to today's incredibly-complex multi-celled organisms of which human beings are just one of countless living species. The camera crew used the latest technology and techniques to create some of the most amazing wildlife footage ever filmed, and this helped the series become a huge hit. It was viewed by over 500 million people all around the world, and became the first of nine major series he produced for the BBC now known as the Life collection.

The next in the Life collection came in 1984 when he produced a 12-episode series called The Living Planet in which we see how living organisms have adapted to a huge range of natural environments both on land and in the sea. David's next major series was 1990's 12-episode The Trials of Life in which he shows us the various stages of life in the wild. We see amazing courtship and mating rituals and how various species give birth and raise their young.

Video: A collection of highlights from 1990's The Trials Of Life, one of the many Life documentary series David Attenborough produced for the BBC.

His 6-episode series Life in the Freezer about Antarctica and the creatures living there followed in 1993. Then in 1995 he produced another 6-episode series called The Private Life of Plants in which he shows us how various plants grow, protect themselves, reproduce and even communicate with one another. We also see some amazing examples of how plants and animals rely on each other to survive. Next came The Life of Birds in 1998 and then The Life of Mammals in 2002. These were followed in 2005 by Life in the Undergrowth in which we see incredible close-ups of spiders, scorpions, centipedes and many insects like ants and bees that live in very complex social systems. In 2008 came Life in Cold Blood, a fascinating and sometimes scary 5-part series about amphibians and reptiles including deadly snakes, huge crocodiles and poisonous frogs.

During this period he also produced The Blue Planet (2001), an 8-part series on life in the world's oceans, and Planet Earth (2006), an 11-part series that was the most expensive nature documentary series ever made by the BBC and also the first filmed in high definition (HD). Each episode focused on a different habitat, from deserts, mountains and forests to rivers, lakes and oceans. Then in 2011 he made Frozen Planet about life in the polar regions, and in 2016 he made Planet Earth II, a sequel to Planet Earth filmed in spectacular ultra-high-definition (4K).

As well as making dozens of wildlife documentaries, David produced a number of anthropological documentaries. He showed viewers how traditional indigenous cultures in many parts the world had created sustainable social systems and lifestyles that allowed them to live in harmony with the natural world for tens of thousands of years without destroying it. He often contrasts the sustainability of these cultures with the environmentally-destructive and unsustainable industrial culture that has spread across the world since the Industrial Revolution began in England in the late-1700s.

To continue, we require more than intelligence. We require wisdom. David Attenborough

In recent documentaries like the 2019 Netflix series Our Planet and in the BBC's Climate Change – The Facts, David has been very focused on the environmental problems that industrial culture has caused, especially habitat loss and climate change. As well as looking to science and technology for solutions like renewable energy and sustainable farming, David looks to traditional indigenous cultures for the sort of environmental knowledge and ecological wisdom needed to live sustainably. He also looks to environmental activists and political parties to stop the fossil fuel industry from misleading the world with its campaign of lies and misinformation about climate change, solely in order to protect its profits. Even though time is short and it won't be easy, David believes it isn't too late as long as we all come together and work as one.

anthropological (adjective): related to the study of human social systems, customs, traditions, and beliefs - We went on an anthropological study trip to learn about family ties in Bali.

biodiversity (noun): the number of different animals and plants living in a particular place - Loss of biodiversity due to habitat destruction is one of our biggest problems.

climate change (noun): global changes in temperature, wind patterns, rainfall, etc mainly caused by the emission of heat-trapping gases that cause global warming - If we don't prevent further climate change, our own species could disappear.

close-up (noun): a photograph or filmed image of someone or something taken from very close by - Those close-ups taken from inside the beehive are amazing.

evolution (noun): the gradual development of plant and animal life over millions of years due to natural selection - Charles Darwin was one of the first to figure out how evolution works.

extraordinary (adjective): very unusual, or far beyond what's normal - Che Guevara was a man of extraordinary courage and determination.

geology (noun): the study of the Earth's structure, development and materials, such as minerals and rocks - The more you learn about geology, the more interesting it becomes.

habitat (noun): the natural home of an animal, plant, or other living thing - Our garden is a habitat for insects and worms, isn't it?

indigenous (adjective): having lived in a particular place for a very long time, esp. in relation to invaders or outsiders - Australia has always treated its indigenous people as second-class citizens.

lifestyle (noun): the way you live, or the type of life you have - If indigenous cultures didn't have sustainable lifestyles, they wouldn't last for long.

naturalist (noun): a person who studies living things in their natural environment - European naturalists used to think that God designed every plant and animal.

organism (noun): a living thing - Our bodies are habitats for tiny organisms like mites, microfungi and bacteria.

overrun (verb): to occupy a place in such large numbers that it becomes a problem - Our beaches are overrun with tourists during the summer.

put (sth) right (phrase): to correct of fix something after it has gone wrong - If you put a prisoner to death, how do you make it right if they turn out to be innocent?

sustainable (adjective): able to continue for a long time without causing problems - If we used sustainable farming methods, we wouldn't have to buy fertilizer.

(the) wild (noun): the natural environment - They take animals from the wild and sell them to zoos.

zoology (noun): the scientific study of animals - If you love animals, why not get a degree in zoology?

"Tonight, we've got rather a different program for you. I am David Attenborough, and I am 93. I've had the most extraordinary life. It's only now that I appreciate how extraordinary. The living world is a unique and spectacular marvel. Yet the way we humans live on Earth is sending it into a decline. Human beings have overrun the world. We're replacing the wild with the tame. This film is my witness statement and my vision for the future. The story of how we came to make this our greatest mistake. And how, if we act now, we can yet put it right. Our planet is headed for disaster. We need to learn how to work with nature, rather than against it. And I'm going to tell you how."