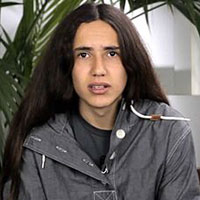 Ever since he was little, Mexican-American boy Xiuhtezcatl (pronounced ʃuːˈtɛzkɔːt or shoo-TEZ-kawt) Martinez has been trying to make the world a better place. When he was just six years old he gave his first public talk, the first of hundreds including several at the United Nations. He has also written books on the environment and music, written about progressive politics for TeenVogue magazine, and learned how to rap and make hip hop videos. And he's done all this while doing his schoolwork and all the other things teenagers do. Find out how he's done all this in the reading below, but before that why not learn the vocabulary in Wordchecker? Then watch Xiuhtezcatl and his little brother rapping and complete the gapfill exercise while listening to the lyrics. And don't forget to test your understanding by doing the quiz as well.

Video: Xiuhtezcatl and his little brother Itzcuauhtli rapping in their 2011 hip hop track Live as if our Future Matters.

Watch the video and read the lyrics as you listen. See if you can fill the gaps with these words:
dysfunction | greed | lost your mind | planet | polluted | revolution | stand together | united

Xiuhtezcatl Martinez, also known as Xiuh (pronounced "shoe") to his friends, was born in the US state of Colorado in 2000. On his father's side his ethnicity is Mexika, an indigenous people who ruled the Aztec Empire from their city state of Tenochtitlan in what's now called Mexico City until it was destroyed by Spanish invaders in 1521. His father taught Xiuh and his siblings about their Mexika heritage, central to which is the belief that all life is connected, and that it's the sacred duty of all Mexika people to protect the natural world for future generations. For Xiuh, this meant it was his duty to become an environmental activist and do everything he could to save the planet.

Soon after being taught about his indigenous heritage and his sacred duty, Xiuh gave his first public talk. He told the audience they could help the planet by using less electricity, and said they should turn off lights that aren't being used. Over the next few years he gave hundreds of public talks, and by the age of 13 he had done so much work as a volunteer to protect the natural environment that he was awarded the U.S. Volunteer Service Award by President Barack Obama.

As well as being an activist and going to school, Xiuh was becoming interested in rap music and was soon creating his own music and making videos. When he was just 14 his group Earth Guardians released their Generation Ryse album. Xiuh became so good at making music that his song Speak for the Trees won the Jury Award in a United Nations competition for best song on the theme of climate change. Then in June 2015, when he was 15 years old, Xiuh was invited to speak at the United Nations General Assembly on Climate Change. This was three years before fellow teenage activist Greta Thunberg addressed the 2018 United Nations Climate Change Conference in Poland. Like Greta, Xiuh was nervous as he waited to speak in front of so many important people. To see what happened next, watch the video below.

Video (with English captions): Xiuhtezcatl speaking to members of the United Nations General Assembly on Climate Change on June 29, 2015.

Since giving his talk to the United Nations, Xiuh has continued to work as an activist and to make music. He released his first solo album Break Free in 2018, and then in January 2019 he released the single Boombox Warfare featuring Jaden Smith, son of actor Will Smith and brother of fellow recording artist Willow Smith. The song is about music's role in the environmental movement and its power to make us feel passionate about issues like injustice and planetary destruction. Watch the video and test your listening skills by seeing if you can hear the words being rapped at the same time as they appear on the screen.

climate change (noun): global changes in temperature, wind patterns, rainfall, etc mainly caused by the emission of heat-trapping gases that cause global warming - If we don't prevent further climate change, our own species could disappear.

dysfunction (noun): failure to work well or function correctly - Corruption and dysfunction in our government is making these problems worse.

ethnicity (noun): the fact of belonging to a social group that shares a cultural and historical heritage - People of many ethnicities and religions are living together here peacefully.

greed (noun): a selfish wish to get more than you need, or more than your fair share, of something like money, possessions, power, food, etc - The one thing we need to get rid of is human greed.

heritage (noun): traditions and customs that are passed from one generation to the next, such as spiritual beliefs, arts and culture, language, social norms, etc - Why did the Europeans try to destroy our indigenous heritage?

indigenous (adjective): of the people who have been living in a particular place for a very long time; original inhabitants of a place - Indigenous Australians have lived on their land for at least 60,000 years.

lose your mind (phrase): to become crazy or go insane - You want to rob a bank? Have you lost your mind?

movement (noun): a group of people who work together to advance a political or social cause - The gay pride movement began in New York City in the late 1960s.

passionate (adjective): having or showing strong feelings about something - Lots of young people are passionate about climate change these days.

polluted (adjective): made dirty by harmful or poisonous substances, as in "polluted air" or "polluted river" - Polluted air is making more and more people sick.

progressive (adjective): supporting social or political change that aims to make the world fairer and more equal for all - Why don't you vote for progressive politicians?

revolution (noun): a sudden change in government or political system that's brought about by a mass movement or struggle - In Cuba, a popular revolution overthrew the US-backed government.

sacred (adjective): having great religious or spiritual importance - If they're sacred songs, you have to go to a church to hear them.

stand together (phrasal verb): to agree strongly and act together to achieve a goal - Progressive people are standing together and demanding real democracy.

united (adjective): joined together politically; sharing a purpose and acting together - In the 1940s, Russia and the USA were united in their fight against fascism.

volunteer (noun): a person who offers to work without being paid for it - Public health volunteers played a big role in stopping the virus from spreading.

[1:12] Live as if our future matters
Don't leave us an Earth that is torn and battered
The ruling generation's gotta wake up now
And our generation's gonna show you how

[1:21] Why are you sleeping? Why are you so blind?
When I look around I think you've lost your mind
How can you diss the Earth this way?
She gives us all life each and every day
But you spit on her and you ask for more
Without thinking what future generations will endure
What will be left by the time you are done?
Your children will suffer from your dysfunction

[1:39] So live as if our future matters
Don't leave us an Earth that is torn and battered
The ruling generation's gotta wake up now
And our generation's gonna show you how

[1:48] The air's so polluted, gettin' hard to breathe
Forests disappearing, there'll be no more trees
Water is rising in the seas
You unleashed a storm because of your disease
Warning bells are ringing, you better take heed
Destroyin' the Earth with your greed
The storm is comin', you better beware
What you're leaving us children just ain't fair

[2:06] So live as if our future matters
Don't leave us an Earth that is torn and battered
The ruling generation's gotta wake up now
And our generation's gonna show you how

[2:16] Youth are united, all over the planet
We're not taking our awesome Earth for granted
We stand together and we're changin' the game
Our movement will go down in history of fame
And all the people who've been fighting for so long
Are the heroes who have made our revolution strong
United together our message will be heard
And we'll create a world that we deserve

[2:34] So live as if our future matters
Don't leave us an Earth that is torn and battered
The ruling generation's gotta wake up now
And our generation's gonna show you how

[2:43] Live as if our future matters
Don't leave us an Earth that is torn and battered
The ruling generation's gotta wake up now
And our generation's gonna show you how

[3:08] Time to tell a story of all that's good
Show the world we all share the same hood
We have to protect our united force
And get reconnected to our life source
We're gonna get a generation of inspired youth
To stand up together and tell us the truth
That people are risin' like a wave on the sea
To change the direction of our destiny

[3:26] So live as if our future matters
Don't leave us an Earth that is torn and battered
The ruling generation's gotta wake up now
And our generation's gonna show you how