How did a 15-year-old high school student from Sweden become the world's most famous climate change activist? This reading tells the story of Greta Thunberg's amazing journey, but before you begin why not learn the vocabulary in the Wordchecker list below? Then after reading, don't forget to check your understanding by doing the Greta quiz.

Greta Thunberg was born in Stockholm, Sweden, in 2003. Her mother Malena is a famous opera singer, and her father Svante was an actor until he quit to look after Greta and her little sister Beata. Greta was a shy girl who didn't say much at school, and this led to bullying by some of the other kids. It got so bad that Greta became very depressed and even stopped eating. She lost a lot of weight and could have died if her parents hadn't found specialist doctors with a treatment plan that worked. Her mum and dad also found her a new school, and making new friends also helped her to recover and become interested in the wider world again.

Greta first learned about climate change when she was 8 years old. Even at that young age she could see it was a serious problem, and the more she learned as she grew older, the more worried she became. She learned that carbon dioxide (CO2) was one of the greenhouse gases causing global warming and climate change, and that airline flights released many tonnes of CO2 into the atmosphere. Nearly everyone she knew said the climate crisis was very serious, but they also made it worse by flying all over the world for their holidays. Everyone was saying the right things, but nobody was doing the right things. So Greta decided to do something about it.

She had heard about workers going on strike to demand better pay, and imagined students going on strike to demand more action against climate change. She told her friends about her idea, but none of them seemed interested in joining her. Instead of giving up, Greta asked her dad to take her to a building supplies store where she bought a board and some paints. Then she made a big sign and painted the words "School Strike for the Climate" in Swedish. She also printed flyers full of facts about the climate crisis. After breakfast on August 20 2018, she rode her bicycle to the Swedish parliament where the government met. Svante rode behind her, carrying the sign. After sending her dad home, Greta found a good spot to set up her sign and sat down on her cushion with her flyers by her side. 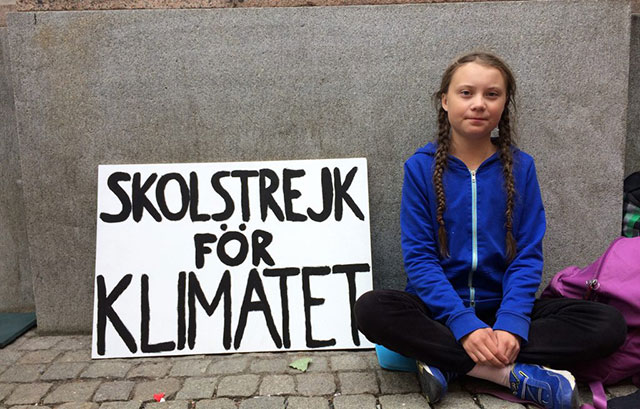 She asked a passer-by to take a photo of her and posted it on her Twitter account. Even though she only had around twenty followers, it was retweeted dozens of times. Within a few days she was being interviewed by reporters, other kids had joined her, and she was being supported by Greenpeace activists and others. Greta's life would never be the same again.

In December 2018, just a few months after starting her strike, Greta was invited to speak at the United Nations COP24 Climate Change Conference in Poland. Her heart was beating fast as she nervously waited to be asked to speak. Watch the video below to see what happened next.

My name is Greta Thunberg. I am 15 years old. I am from Sweden. I speak on behalf of Climate Justice Now!. Many people say that Sweden is just a small country and it doesn't matter what we do. But I've learned you are never too small to make a difference. And if a few children can get headlines all over the world just by not going to school, then imagine what we could all do together if we really wanted to. But to do that, we have to speak clearly, no matter how uncomfortable that may be.

You only speak of green eternal economic growth because you are too scared of being unpopular. You only talk about moving forward with the same bad ideas that got us into this mess, even when the only sensible thing to do is pull the emergency brake. You are not mature enough to tell it like it is. Even that burden you leave to us children. But I don't care about being popular. I care about climate justice and the living planet.

Our civilization is being sacrificed for the opportunity of a very small number of people to continue making enormous amounts of money. Our biosphere is being sacrificed so that rich people in countries like mine can live in luxury. It is the sufferings of the many which pay for the luxuries of the few.

In the year 2078, I will celebrate my 75th birthday. If I have children maybe they will spend that day with me. Maybe they will ask me about you. Maybe they will ask why you didn't do anything while there still was time to act. You say you love your children above all else, and yet you are stealing their future in front of their very eyes. Until you start focusing on what needs to be done rather than what is politically possible, there is no hope. We cannot solve a crisis without treating it as a crisis.

We need to keep the fossil fuels in the ground, and we need to focus on equity. And if solutions within the system are so impossible to find, maybe we should change the system itself. We have not come here to beg world leaders to care. You have ignored us in the past and you will ignore us again. We have run out of excuses and we are running out of time. We have come here to let you know that change is coming, whether you like it or not. The real power belongs to the people.

biosphere (noun): all the places in which life can exist, including anywhere on land, in the sea or in the air where plants, animals, birds, etc can live - The biosphere goes underground too if things like insects and bacteria live there.

burden (noun): a difficult task, a serious responsibility, or a heavy load - In most families, women still shoulder the burden of looking after sick relatives.

climate change (noun): global changes in temperature, wind patterns, rainfall, etc mainly caused by the emission of heat-trapping gases that cause global warming - Companies that have caused climate change need to be punished.

climate justice (noun): fairness in issues related to climate change, such as fair treatment of people who are affected by it, and fair punishment for those who made it worse - Did you learn about climate justice when you were studying for your law degree?

crisis (noun): a very difficult or dangerous time - The country will be in crisis if the president ignores the election result.

depressed (adjective): feeling sad or uninterested in life, esp. if the feeling continues for a long time - If he always looks sad or bored, he could be depressed.

equity (noun): fair and equal treatment for everyone, no matter what race, gender, sexuality, religion, etc they are - Women are still fighting for equity when it comes to fair pay.

eternal (adjective): lasting forever, or never ending - It's hard to imagine something being eternal, isn't it?

flyer (noun): a printed sheet of paper that's handed out to people, usually to publicise something - We ran out of flyers, so we had to print some more.

give up (phrasal verb): 1. to stop doing something you usually do 2. to stop trying to achieve a goal - I tried to give up¹ cigarettes, but it was too hard so I gave up² trying.

greenhouse gas (noun): a gas that causes global warming, such as CO2, methane and fluorocarbons - What else can we do to cut greenhouse gas emissions?

Greenpeace (noun): an international organization that aims to protect the natural environment - Those Greenpeace activists saved our forests.

sacrifice (verb): to give up something of great value in order to do or achieve something else - My grandma sacrificed her career as a musician to raise her kids.

strike (noun): a form of peaceful protest by refusing to work or study - At first, most parents didn't support their kids' climate strike.

suffering (noun): physical or emotional pain or discomfort - How much suffering can people bear before they start demanding change?