Did you know that the Arctic is warming faster than any other place in the world? Find out what this means for our polar bears in this reading exercise. You can find the meaning of the words in bold by checking the vocabulary list below, and you can check your understanding by doing the Endangered Species Comprehension Quiz. 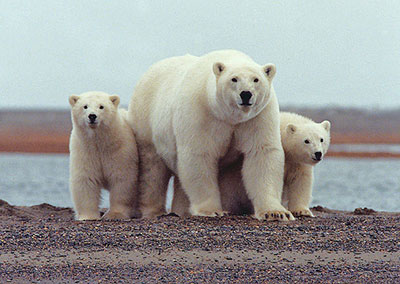 In spring 2008, the polar bear was placed on the endangered species list. According to the USA's Endangered Species Act, an endangered species is an animal, plant or any other kind of wildlife that is likely to face extinction in its natural habitat. Polar bears had already been categorized as a "threatened" species which the ESA defines as one that is likely to become "endangered" in the foreseeable future.

The polar bear is the first animal that has been classified as endangered due primarily to global warming. Global warming is a form of climate change caused by increased levels of carbon dioxide and other greenhouse gases that become trapped in the atmosphere. Oil and gas heaters, engines using oil or petrol (or gasoline) and coal-powered electricity plants all require fossil fuels that lead to global warming. Renewable energy sources or renewables that don't cause global warming include solar, wind and hydro-electricity power. These alternative forms of power, as well as the science of climate change, have been strongly attacked by many of the world's biggest companies in order to protect the huge profits they make from fossil fuels. They do this even though they're fully aware of how much fossil fuels are damaging our planet and endangering many of the species we share it with.

The polar bear's habitat is more vulnerable to global warming than many other species. Polar bears live mainly on the sea ice in the Arctic. This is where they hunt for fish and build up fat reserves. When the ice melts many polar bears move to land and live off their stored fat. In the Arctic, global warming is causing the ice to melt slightly earlier and form slightly later. This results in a shorter feeding season for the polar bear. Some risk their lives to find ice. If they have to swim too far they will drown from exhaustion and hunger. The World Wildlife Fund estimates that over 25% of Arctic sea ice has disappeared in the past 30 years.

It is not only the polar bear that is at risk in the Arctic. Every species of plant, animal, and insect there is threatened by global warming. Nevertheless, groups of concerned scientists and environmentalists such as the World Wildlife Fund often study large carnivores in order to assess the health of an ecosystem. The Arctic food chain relies on the polar bear. In addition, donations are more commonly offered for the protection of large animals such as bears or elephants. People in general are less interested in conservation efforts that protect small wildlife, such as plants or insects. However, by using donor money to protect the habitats of larger animals through reforestation and similar programs, entire ecosystems with many threatened or endangered species can be saved.

It is important that animals such as the polar bear make it onto the endangered species list. Once they are on the list there are laws that protect these animals from being hunted for food or sport. Agencies also receive money and tools to protect the habitat and recover the species. The goal of removing the animal from the list is often achievable. Since the Endangered Species Act was introduced in the US in 1973, many species have been taken off the list due to increased populations. In fact, it is rare for a species to go extinct after they make the list. Sadly, many species do go extinct while waiting for consideration.