The Greenpeace motif of rainbow and dove, both traditional symbols of peace and hope

In early August 1945, near the end of World War Two, the USA dropped nuclear bombs on two Japanese cities. At least 200,000 people died. After the war ended a nuclear arms race began when the Soviet Union started developing nuclear weapons of its own. By the 1950s many people feared this arms race between the world's two superpowers could result in a nuclear war and planetary destruction. This led to many people joining peace protests in the 1960s, including a group of environmentalists and peace activists who often met in Vancouver, a city on Canada's west coast.

In 1970 they met to discuss nuclear bomb tests that were being carried out by the US military on Amchitka Island in nearby Alaska. They knew it would take more than protest marches to stop these tests, so they decided to carry out direct action campaigns instead. They also decided to create a new organization to plan and publicize these campaigns, but they didn't know what to call it. They needed a name that worked for both environmental "green" campaigns and anti-nuclear "peace" campaigns, and when someone suggested "Greenpeace" they knew they'd found it.

With their new organization formed and named, they were ready for action. They knew the Amchitka Island nuclear test could not go ahead if a manned ship was in the area around the island, so they chartered an old fishing boat and set sail on September 15, 1971. But after 42 days the U.S. coastguard forced them to turn back. Even though they didn't stop the test, their action got a lot of publicity and a few months later the US stopped testing their bombs on Amchitka Island. Greenpeace's first campaign had proved that direct action could work. 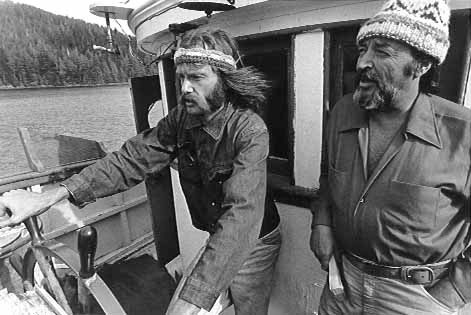 Greenpeace's next campaign was in 1972 against French nuclear testing in the Pacific Ocean. Once again Greenpeace activists sailed towards the test site on Moruroa Atoll in French Polynesia. This time their boat was rammed by a French war ship and the crew were arrested, and once again they got the publicity they were seeking. Next came a campaign to stop the slaughter of baby fur seals in Canada and the slaughter of seals in Scotland. Then in 1975 they began the first of many direct action campaigns to stop the slaughter of whales. After locating a fleet of Russian whaling ships, activists on Greenpeace motorboats got between the whaling ships and the whales they wanted to slaughter. This sort of action was very dangerous, and rarely worked, but again it got the kind of publicity that eventually led to the banning of commercial whaling in 1986.

In 1977 Greenpeace bought a large fishing trawler and renamed it the Rainbow Warrior. They used the ship in a series of direct action campaigns against whaling, seal hunting, nuclear testing and the dumping of nuclear waste. Then in 1985, after leading a fleet of yachts from New Zealand on another campaign against French nuclear testing, the Rainbow Warrior was bombed by the French secret police. They sank the ship and a Portuguese-Dutch photographer on board at the time was killed.

Greenpeace has bought a number of other ships since the tragic bombing of the Rainbow Warrior and used them in more recent campaigns against nuclear testing and Japan's so-called "scientific whaling". They have also campaigned against environmentally-destructive fishing, logging and farming, and against the use of fossil fuels, toxic chemicals and genetically modified organisms (GMOs). They have taken action to protect forests and endangered species and carried out many campaigns related to global warming and climate change.

Video: Watch this short video from Greenpeace USA to see what Greenpeace does and why it does it. The closed caption (CC) subtitles are well-written if you'd like to read them while listening to the commentary. (2 minutes)

Greenpeace has grown to become one of the world's biggest and most powerful non-governmental organizations. It's now made up of independent organizations in over 50 countries that work together under Greenpeace International. As well as carrying out non-violent direct action campaigns, Greenpeace also works with governments, corporations, schools and other NGOs on a wide range of environmental and social issues.

In 2018 Greenpeace held a "Big Listening" exercise in which over 300,000 people shared their ideas on the organization's future direction. This led to the release of a new mission statement titled The Framework: A Summary. The statement says, "The struggle for a green and peaceful future requires fundamental changes in the way we relate to nature and to each other. From climate change to inequity, armed conflict to social injustice, the great challenges of our time are not only urgent, they are intimately linked. From the power structures that make them possible to the mindsets that make them acceptable, they are interwoven and must be changed together."

The statement goes on to say that, "Today's economic and cultural systems set us apart from nature. They reward environmental destruction, promote excessive consumption ... prioritise short-term profit over sustainability and well-being. Let us be bold. Let us join forces with our allies. Let us build the new systems for that green and peaceful world that we all know in our heads and in our hearts is possible." 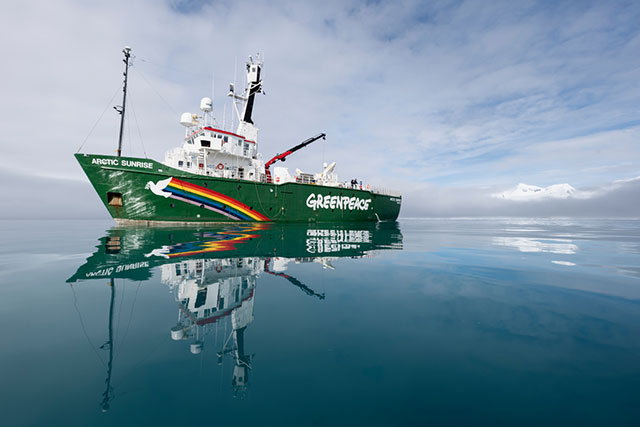 activist (noun): a person who takes part in campaigns to bring about political or social change - Environmental activists chained themselves to trees to stop the logging.

arms race (noun): a contest between countries to develop the most powerful war weapons - I remember how scary it was when the nuclear arms race was always in the news.

carry out (phrasal verb): to perform a particular task or mission - The British carried out a series of nuclear bomb tests in Australia.

coastguard (also "coast guard" and "Coast Guard") (noun): an organization that watches over coastal waters, helps vessels in trouble, and in some cases can also act as a security or military force - After our yacht tipped over, we called the coastguard and they rescued us.

consumption (noun): the use of energy, fuel, materials, etc; the buying of goods and services - We need to reduce our consumption of plastics.

direct action (noun): a form of activism that aims to achieve a goal by acting rebelliously or disobeying authorities - Is damaging equipment used to cut down trees an acceptable form of direct action?

endangered (adjective): in danger of becoming extinct or disappearing in the near future - Did you know that over 30,000 species are already endangered?

inequity (noun): a lack of fairness and justice, esp. within a social or economic system - The worst thing about capitalism is the degree of inequity it creates.

mindset (noun): attitudes and beliefs that shape the way we see the world and think about our lives - How do we get rid of that old mindset that puts money ahead of everything else?

mission statement (noun): a document that expresses the goals of an organization and describes the work it does and why it does it - I read their mission statement and liked it, so I joined.

non-governmental organization (abbr: "NGO") (noun): an organization that isn't part of a government and isn't operating for profit - Most NGOs are funded by donations.

nuclear bomb (noun): a very powerful nuclear weapon that releases huge amounts of destructive energy when it explodes - How many nuclear bombs does France have?

power structure (noun): an established system in a government, company or society that allows certain people to gain and use power to control resources and impose their will on others - In most power structures, the best way to improve your position is by doing favours for others with more power than you.

publicity (noun): attention in the media (from newspapers, television, radio, etc) or online (from bloggers, influencers, celebrities, etc) - The more publicity we get, the better it is for our campaign.

slaughter (noun): the deliberate killing of many people or animals - What else can we do to stop the slaughter of dolphins and whales?