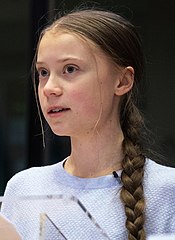 Did you know that environmental activist Greta Thunberg features in one of the music videos that British rock band The 1975 made for their 2020 album Notes On A Conditional Form? She speaks about climate change while stock footage and graphics from companies like Shutterstock and Getty Images are shown, implying that in the future images like these could be the only way people can see what our planet looked like before it suffered the effects of global warming. Before watching the video and reading the transcript, learn the vocabulary in the Wordchecker below. Then check your understanding by doing the quiz.

Video: Greta Thunberg speaks about climate change and global warming in this music video by British rock band "The 1975" for their 2020 album Notes On A Conditional Form

We are right now in the beginning of a climate and ecological crisis, and we need to call it what it is - an emergency. We must acknowledge that we do not have the situation under control, and that we don't have all the solutions yet - unless those solutions mean that we simply stop doing certain things. We must admit that we are losing this battle. We have to acknowledge that the older generations have failed. All political movements in their present form have failed, but Homo sapiens have not yet failed. Yes, we are failing, but there is still time to turn everything around. We can still fix this. We still have everything in our own hands. But unless we recognise the overall failures of our current systems, we most probably don't stand a chance.

We  are facing a disaster of unspoken sufferings for enormous amounts of people, and now is not the time for speaking politely or focusing on what we can or cannot say. Now is the time to speak clearly. Solving the climate crisis is the greatest and most complex challenge that Homo sapiens have ever faced. The main solution, however, is so simple that even a small child can understand it. We have to stop our emissions of greenhouse gases, and either we do that, or we don't. You say that nothing in life is black or white, but that is a lie - a very dangerous lie. Either we prevent a 1.5 degree of warming, or we don't. Either we avoid setting off that irreversible chain reaction beyond human control, or we don't. Either we choose to go on as a civilisation, or we don't. That is as black or white as it gets, because there are no grey areas when it comes to survival.

Now  we all have a choice. We can create transformational action that will safeguard the living conditions for future generations, or we can continue with our business as usual and fail. That is up to you and me. And yes, we need a system change rather than individual change, but you cannot have one without the other. If you look through history, all the big changes in society have been started by people at the grassroots level - people like you and me. So, I ask you to please wake up and make the changes required possible. To do your best is no longer good enough. We must all do the seemingly impossible. Today, we use about 100 million barrels of oil, every single day. There are no politics to change that. There are no rules to keep that oil in the ground. So, we can no longer save the world by playing by the rules, because the rules have to be changed. Everything needs to change, and it has to start today. So, everyone out there, it is now time for civil disobedience. It is time to rebel.

chain reaction (noun): a series of events in which each event causes the next one to happen, such as in a chemical reaction - It's the sort of chain reaction that's impossible to stop after it's been triggered.

civil disobedience (noun): a peaceful method of political protest in which protesters refuse to comply with a law or they disobey police orders or soldiers - Gandhi's campaign of civil disobedience led to India's escape from British control.

climate change (noun): global changes in temperature, wind patterns, rainfall, etc mainly caused by the emission of heat-trapping gases when fossil fuels like coal and oil are burned - Oil companies knew about man-made climate change way back in the 1970s.

crisis (noun): a very difficult or dangerous time - It's always poor people who suffer the most during an economic crisis.

disaster (noun): a natural event like an earthquake or a flood that kills many people, or a man-made accident like an oil spill that causes massive destruction - It's the country's worst natural disaster since the 1968 earthquake.

do your best (verb): to do all you can, or to try your hardest, to achieve a goal - If you train hard and do your best during the game, you'll have a good chance of winning.

emission (noun): something like a gas or radiation that's released into the air - You can help to reduce these emissions by driving and flying less.

grassroots (noun/adjective): if something like a political movement is called grassroots, it means ordinary people started it themselves, without being led by politicians or other powerful people - If a movement for political change has lots of grassroots support, it's difficult to stop.

greenhouse gas (noun): any gas that stops heat from escaping from the atmosphere and causes the greenhouse effect and global warming, such as carbon dioxide and chlorofluorocarbons - We're cutting our greenhouse gas emissions by building more solar and wind farms.

grey area (noun): a situation in which it is unclear whether something is right or wrong, correct or incorrect, true or false, legal or illegal, etc - Tax laws are full of grey areas that companies use to avoid paying tax.

movement (noun): a group of people who work together to advance their shared political, social, or artistic ideas and goals - The Black Lives Matter movement wants justice for black people.

rebel (verb): to oppose or act against powerful people or systems, esp those causing problems you want to solve or prevent - They cut our wages, so we rebelled by protesting instead of working.

rebel (noun): someone who tries to remove a leader or bring down a government by using force or joining an armed group - It took just a few thousand well-trained rebels to defeat Cuba's US-backed army.

stand a chance (verb): to be likely to achieve something like success or survival - You won't stand a chance of passing your exam if you don't study.

under control (phrase): if a danger or emergency (like a fire or a disease) is under control, it means people have stopped it from getting worse or spreading - It took about an hour for the firefighters to bring the fire under control.