Habitat loss is a serious environmental issue that has led to thousands of species of animals, birds, plants and fish becoming endangered or extinct. In this reading you'll learn about the ways in which habitats of many kinds are being damaged or lost forever. While reading, check the meaning of words in bold by scrolling down to the Wordchecker below. After reading, check your understanding by doing our Habitat Loss Quiz.

Animals, plants and all other living things can only survive in places that give them what they need, and we call these places habitats. Every species needs a particular kind of habitat with the right kind of food, the right kind of shelter, the right climate, and so on. If a habitat is destroyed or so badly damaged that it no longer provides what's needed for a species to live there, the species has experienced habitat loss.

When a species experiences serious levels of habitat loss, its population declines and it can become endangered. If its population continues to decline, it eventually becomes extinct and biodiversity is further reduced. This is happening right now, and it's getting worse every day. According to The International Union for Conservation of Nature's current IUCN Red List of Threatened Species, more than 35,500 species are already threatened with extinction, including 40% of amphibians, 34% of conifers, 33% of the corals in coral reefs, 26% of mammals and 14% of birds. These numbers are truly shocking, and they show how serious the problem of habitat loss has become.

Habitat loss is occurring all around the world, and it's damaging or destroying ecosystems in every type of habitat. Terrestrial habitats like rainforests and woodlands are being cleared to make room for agricultural land, and they're also being destroyed by forest fires made worse than ever by climate change. Aquatic habitats are also being lost or seriously damaged in many parts of the world. Rivers are running dry, lakes are being filled with toxic waste, wetlands are being drained and marine habitats are being lost due to destructive overfishing and the effects of climate change.

One of the main causes of terrestrial habitat loss is deforestation in which entire forests are cleared, either to harvest timber or to create land for agriculture. When harvesting timber, logging companies often find that clearing an entire forest is cheaper than cutting down selected trees and leaving the rest. This is called clear-cutting and it's being done in forests and woodlands around the world, even in protected rainforests of the Amazon Basin. These are some of the world's richest habitats where nearly half of all the plant and animal species on Earth live. It's estimated that around 80,000 acres of rainforest is lost to burning and clear-cutting every day. Even if the cleared land is then used to create tree plantations, they are usually for a single species like the oil palm or the rubber tree. Replacing forests with plantations often destroys all the natural habitats in an entire region, leaving wildlife with nowhere to live. This makes mass extinctions far more likely to occur. 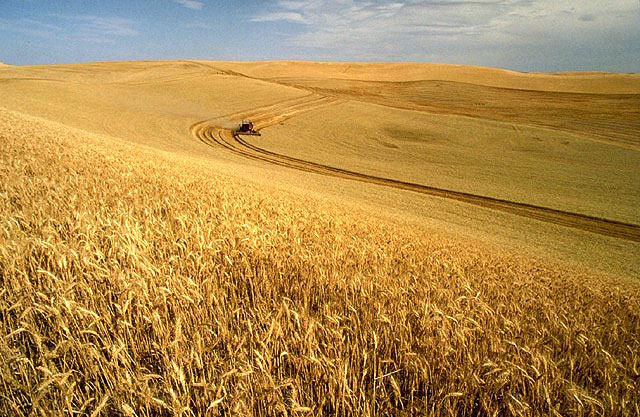 A wheat field in Idaho, USA. Modern agricultural methods can lead to entire regions being cleared of natural habitats, leaving wildlife with nowhere to live.

The same degree of habitat loss can occur when land is cleared for farming. Modern agriculture uses huge machines to harvest crops like wheat and corn, and this way of farming works best when every single tree is cut down. Even small areas of natural habitat aren't left uncleared, and as with tree plantations this can mean all the natural ecosystems and habitats in an entire region are lost forever. 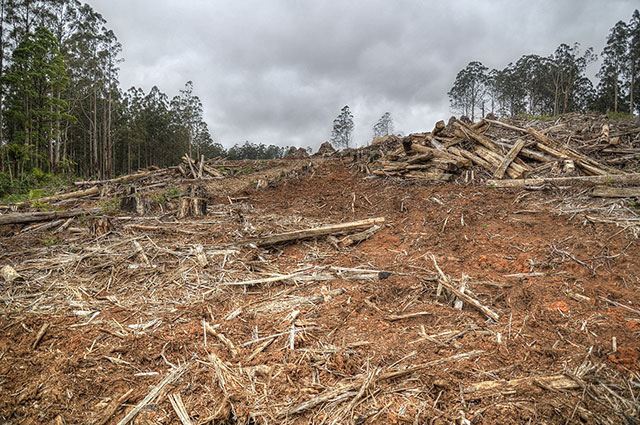 There is also a lot of evidence linking climate change to habitat loss. Average temperatures have increased steadily since 2000, and forest fires have also become more frequent during this period, especially in the USA and Australia. Many of these fires are also more destructive than ever, burning hotter and for longer than before. Not only are they killing plants and animals, they're also killing seeds and organisms in the soil that normally allow forests to grow back after a fire. Climate change is also changing rainfall patterns, and in parts of Africa where less rain is falling desertification is gradually turning fertile grassland habitats into lifeless deserts.

Habitat loss is also occurring in aquatic environments like rivers, lakes, wetlands and oceans. Toxic waste is being dumped into rivers and lakes in industrial areas, while in agricultural areas pesticides and fertilizers are entering waterways and damaging their ecosystems in various ways. The draining and filling of wetlands and marshes to create land for farming and housing is also destroying important habitats. Many of these habitats are breeding grounds and sources of food for water birds, and their loss is seriously endangering many species.

Marine habitats throughout the world's oceans are also coming under threat. Overfishing is getting worse as advanced technologies such as satellite surveillance make it easier than ever to track and catch huge numbers of fish. Fleets of fishing boats trawl the oceans and bring up everything in their nets, but only keep the fish they can sell. The rest is left to die and then thrown back, and doing this can disrupt food chains in marine habitats.

Damage is also being done to many coastal habitats. Mangrove swamps along tropical coasts are breeding grounds for countless species, but these and other shoreline habitats are often cleared to build seafood farms, coastal roads, beach houses, industrial estates, and so on. Coastal habitats can also be damaged by oil spills and the dumping of industrial waste.

Coral reefs are among the most beautiful and colourful habitats in the world. But climate change is causing temperatures in the ocean to rise, and this can result in coral bleaching. If episodes of coral bleaching repeatedly occur, the coral dies and what used to be an underwater wonderland soon becomes an underwater wasteland instead. 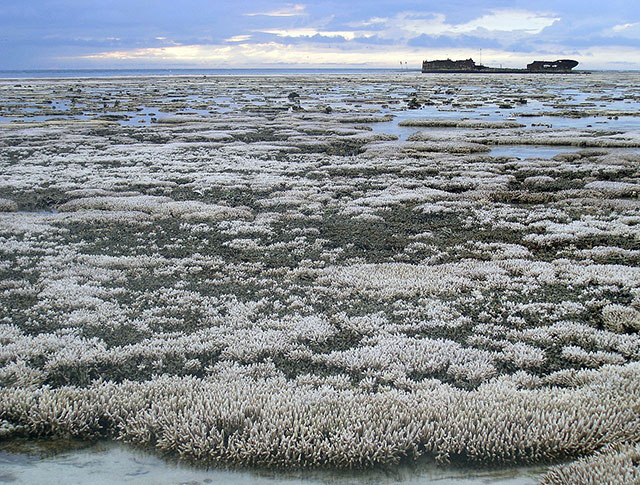 In the 2020 WWF Living Planet Report, Director General of the World Wildlife Fund Marco Lambertini wrote: "The report underlines how humanity’s increasing destruction of nature is having catastrophic impacts not only on wildlife populations but also on human health and all aspects of our lives." But scientists and environmentalists aren't giving up. They are trying to understand why these impacts were allowed to become so catastrophic.

aquatic (adjective): living in or near water, or related to water - It's amazing to see so many aquatic species living in one wetland.

biodiversity (noun): the range of animal and plant life in the world or in a particular habitat - Loss of biodiversity is a serious environmental problem.

clear-cut (also clear-fell) (verb): to destroy a forest by cutting down all the trees - Why are logging companies still clear-cutting rainforests?

conifer (noun): evergreen trees like pines and firs with needle-like leaves and seeds in cones - Can we use any kind of conifer as a Christmas tree?

coral bleaching (noun): a process by which rising water temperatures cause coral to lose colour before dying - In 2016, coral bleaching killed up to 50% of the Great Barrier Reef's coral.

deforestation (noun): the destruction of all the trees and shrubs in a forest or woodland - The government says deforestation creates jobs.

desertification (noun): the process by which fertile land becomes an arid, desert-like wasteland - Nearly 20% of the world's land is threatened with desertification.

dump (verb): to put unwanted waste in the wrong place - Do you know which factory is dumping waste into our lake?

endangered (adjective): in danger of becoming extinct or disappearing in the near future - That many species can't really be endangered, can they?

extinct (adjective): no longer existing (of a species of animal, bird, plant, etc) - Dozens of Australian animals became extinct after the British took our land.

habitat loss (noun): the disappearance of natural habitats in which a species normally lives - How many species are endangered because of habitat loss?

logging (noun): the act of cutting down trees for their wood - The logging stopped after the timber mill closed.

mangrove (noun): a tree that grows in muddy swamps on the seashore, mostly in tropical areas - Lots of fish and crabs lay eggs in the roots of mangroves.

plantation (noun): a large area in which trees of a single species are grown and harvested for wood or a product like tea, rubber, palm oil, etc - We owned a tea plantation in India.

terrestrial (adjective): on or related to land (as opposed to the sea or the sky) - Terrestrial habitats have been studied more than marine habitats.

timber (noun): wood that's been prepared for use as a building material - What kind of timber are you getting for the floors?

trawl (verb): to catch fish by pulling a large net behind a boat - Trawling catches everything, not just the fish they want.

wetlands (noun): land that's regularly flooded by water from a nearby lake, river or ocean - Wetlands are great places for photographing water birds.

March 2021
Contributor: Matt Errey. Matt is the author of several books including 1000 Phrasal Verbs in Context and Common English Idioms for learners, and Matt's ESL Games and Quizzes for teachers. He is also creator of WORD UP, the world's #1 EFL board game.
Facebook  Twitter   Share: Email Print