Did you know that the honeybee is disappearing? This reading tells us how this problem could change the world and affect our future. Before reading, learn the vocabulary in the list below. After reading, do the Disappearing Honeybee Comprehension Quiz to check your understanding. 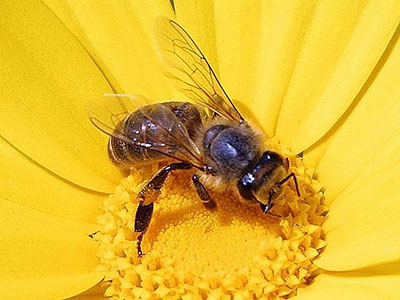 Do you run away when you hear a bee buzzing? Many people do. A bee sting hurts and some people are allergic to bee venom. But did you know that bees are very important to humans? Honeybees do more than just make honey. They fly around and pollinate flowers, plants, and trees. Our fruits, nuts, and vegetables rely on these pollinators. One third of America's food supply is pollinated by the honeybee.

Have you seen or heard a honeybee lately? Bees are mysteriously disappearing in many parts of the world. Most people don't know about this problem. It is called "colony collapse disorder" (CCD). Some North American beekeepers lost 80% of their hives from 2006-2008. Bees in Italy and Australia are disappearing too.

The disappearance of the honeybee is a serious problem. Can you imagine never eating another blueberry? What about almonds and cherries? Without honeybees food prices will skyrocket. The poorest people always suffer the worst when there is a lack of food.

This problem affects other foods besides fresh produce. Imagine losing your favourite ice cream! Haagen Daaz is a famous ice cream company. Many of their flavours rely on the hard working honeybee. In 2008, Haagen Daaz began raising money for CCD. They also funded a garden at the University of California called The Haven. This garden helps raise awareness about the disappearing honeybee and teaches visitors how to plant for pollinators.

Donating money to research is the most important thing humans can do to save the honeybee. Scientists need money to investigate the causes of Colony Collapse Disorder. Some scientists blame CCD on climate change. Others think pesticides are killing the bees. Commercial bee migration may also cause CCD. Beekeepers transport their hives from place to place in order to pollinate plants year round.

Not everyone has money to donate regularly. There are other ways to help the honeybee. Spread the word by telling your friends and family about the problem. Tell your teacher about the disappearing bees too. Maybe your class can write a letter to the government.