Saving natural habitats is an urgent task, and it's something we can all help with. Find out what you can do to stop environmental destruction and save the world's endangered habitats and the animals, plants, birds and fish that live in them. While reading, check the meaning of the words in bold by scrolling down to the Wordchecker vocabulary guide. After reading, have fun doing the Saving Natural Habitats Quiz and Protecting Biodiversity Quiz.

In 1962 a book called Silent Spring by Rachel Carson was published. It was about the damage pesticides were doing to the natural environment and human health. The book became a best-seller and helped the environmental movement grow and become part of the social revolution of the 1960s. More people were also joining organizations like the World Wildlife Fund (WWF) or starting new organizations like Greenpeace. Meanwhile government departments like the USA's Environmental Protection Agency (EPA) were being established in countries all around the world.

Despite all the work that people in organizations like these have done since the 1960s, and despite all the protests and street marches that have been held, things have only gotten worse. Habitat destruction has increased enormously, so much so that by 2020 only 3% of the world’s wilderness remained undamaged by human activity (Note 1). Wildlife populations have fallen by an average of 68% since 1970 according to the WWF Living Planet Report 2020, and over 37,400 species of mammals, birds, fish, amphibians, reptiles and plants are now threatened with extinction (Note 2). 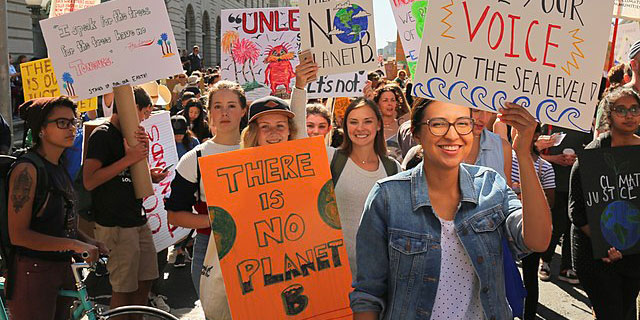 Despite countless protests and street marches like this one in San Francisco, habitat loss has increased enormously since the 1960s.

What went wrong? Why have things become so much worse since the 1960s? The WWF Living Planet Report cited above notes that "Since 1970, total gross domestic product (GDP) has increased four times, the extraction of living materials from nature has tripled, and human population has doubled (p. 52)". The report concludes that rising populations and increasing GDPs have led to more and more people being able to afford a high standard of living, and that this is the main reason for both habitat loss and the climate change emergency.

Many other reports have reached the same conclusion. In 2019 a study commissioned by The United Nations concluded that "High consumption lifestyles in more developed economies, combined with rising consumption in developing and emerging economies, are the dominant factors driving land degradation globally." (Note 3)

If high levels of consumption are so damaging, why do we still want to consume so much? One reason is that companies use advertising to increase sales and profits, and advertising promotes consumerism. Consumerism is the belief that consuming makes us happy, and that buying expensive designer clothes and luxury goods, living in a big house, owning an expensive car, eating gourmet foods, travelling the world, etc is the best way to live. But living this way is directly related to environmental destruction and habitat loss.

A good example of how consumerism and higher standards of living cause habitat loss is the fact that more of us can now afford to eat expensive meats like steak. To satisfy the growing demand for steak, more and more forests in areas like the Amazon Basin are being destroyed to make way for farms that raise beef cattle. So one way to help save natural habitats is to eat less steak and beef. Doing something simple like this can really help, maybe even more than protesting on the streets or debating online.

While eating less or no beef is part of a more sustainable lifestyle, we have to do much more than this. The problems we have created have become so serious that we're now facing a life-or-death global emergency. To survive this emergency, we'll have to change our entire way of life and start putting nature at the centre of our decision-making.

What can we do?

We can start by only buying things we really need. Think about whether consumerism and the idea that shopping makes us happy is what you really believe. Consuming less also means producing less waste, including plastic waste of the sort that's so damaging to oceans and marine life.

We can read books and articles and watch documentaries about things like habitat loss, climate change, renewable energy, environmental politics, and so on. Doing this helps us to make good decisions about things like the food we eat, the transport we use, and who we vote for.

We can join political parties that support policies like the global Green New Deal (Note 4) and degrowth policies that limit production and consumption to sustainable levels.

If you run a business, don't base your decisions on maximizing profits alone. Put nature at the centre of your decision-making to ensure you're not making the environmental crisis even worse than it already is. You could even think about starting a "green" business like installing solar panels or selling organic fruits and vegetables. 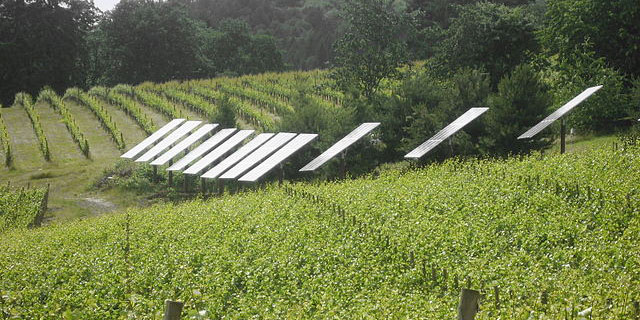 A "green" farm in Oregon USA, with a row of solar panels next to some grapevines and uncleared natural habitat nearby.

We can refuse to buy products like palm oil, the production of which causes major habitat destruction and air pollution when huge areas of tropical forest are burned every year to make way for new palm oil plantations. We can also boycott companies that lobby politicians to block legislation that protects the environment. Many fossil fuel companies do this, as do companies that make pesticides and other damaging chemicals.

We can choose careers in which we can make a difference rather than just make lots of money. Think about whether you'll have the power or skills to play a role in solving the problems we're facing.

Giving indigenous people the right to live on their homelands allows them to use their knowledge of ecosystems to protect local habitats. This has been shown to be more effective at preserving biodiversity than turning their homelands into wilderness areas they can't live on.

One of the main causes of the environmental crisis is population growth, and having lots of children can only make things worse. If you choose to have a family, limit the number of children you have to one or two.

boycott (verb): to not buy or use something in order to protest or punish the producer - We'll boycott any company that doesn't pay its workers a living wage.

consumerism (noun): the belief that buying and consuming goods and services is the key to happiness - Robert is studying the environmental impact of consumerism.

consumption (noun): the buying of goods and services; the use of energy, fuel, materials, etc - Reducing the production and consumption of plastic goods will help.

degrowth (noun): the economic goal of reducing consumption and production in order to solve environmental problems - How can we persuade regular people of the benefits of degrowth?

demand (noun): the amount of something that people want to buy, consume, or own, esp. of a product or service - The demand for electric cars is increasing every year.

endangered (adjective): in danger of becoming extinct or disappearing in the near future - Did you know that over 30,000 species are already endangered?

extinction (noun): the loss of a species of animal, bird, plant, etc for all time - Preventing the extinction of the tree kangaroo is our top priority.

extraction (noun): the removal of something that's firmly in place, like a tooth or a mineral deposit - The people who profit from resource extraction aren't the people affected by it.

Green New Deal (GND) (noun): a plan for the future that combines environmental protection and social justice policies with action on climate change - How does the Green New Deal address income inequality?

gross domestic product (GDP) (noun): a measure of the total value of products and services produced by a particular country in one year - Will China's GDP increase as much as usual this year?

indigenous (adjective): being the original owners or guardians of a particular place - The indigenous people have been living here for at least fifty thousand years.

lobby (verb): to contact powerful people like politicians and try to influence them for your benefit - Do we know how much money companies spend on lobbying politicians every year?

pesticide (noun): a chemical used to kill insects, esp. those that damage or destroy crops - Some of the most common pesticides are now known to cause cancer.

sustainable (adjective): able to continue for a long time without causing problems - The indigenous people have always had a sustainable way of life.

way of life (phrase): the way in which a person or group normally lives - Changing our way of life won't be easy, you know.