Do you hate going to the gym or exercising? Have you heard of something called the fitness pill or exercise pill? Find out all about it in the reading practice exercise below. You can find the meaning of the words in bold in the vocabulary list under the text, and you can check your understanding by doing the Fitness Pill Comprehension Quiz. 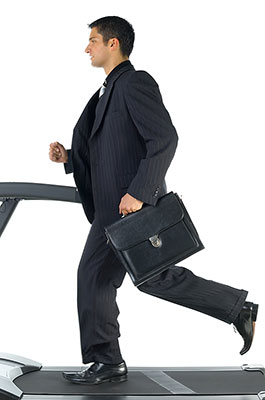 These days there are pills for just about everything. If you can't sleep, take a pill. If you're sad, take a pill. If you're in pain, take a pill. But what about people who are overweight or lack fitness? The best solution for these people is to exercise, but many people don't want to exercise or are unable to exercise. Drug companies are always looking for new pills to sell, and many have spent lots of money on developing a pill for these people too. In the 1990s, scientists working for one of these companies found a new drug that gave mice some of the same benefits as exercise. Newspapers began reporting on this new drug, calling it the "fitness pill" or "exercise pill". They said it could "build muscle, increase stamina, and even burn fat."

The reports said that mice with no previous fitness training could run much longer distances after being given the drug. They said there was evidence that the drug could also help humans by improving fitness and building up muscles. Many people who read these articles wanted to try the pills, but reports about problems with the drug soon began appearing. Researchers found that mice had an increased chance of developing cancer after taking it. This meant the drug would never be approved for human use and the drug company stopped developing it.

Medical researchers are still looking for a drug similar to the one found in the 90s. They're trying to find a new drug with the same benefits that doesn't also cause cancer. They believe such a drug would have many uses, including important medical uses. It could benefit people who can't get out of bed due to ill health. It could also benefit people with diabetes and those with diseases that cause muscle-wasting. Medical researchers also believe such a drug could benefit the average adult as well. Most adults say they don't have enough spare time to do the 40 minutes of daily exercise that doctors recommend. For these people, a so-called fitness pill or exercise pill could be the best solution. But others might say they're cheating by taking a pill instead of exercising. Would you take such a pill if it meant you no longer had to jog, swim or use a treadmill to stay fit?

Many people in the world of sports are concerned about a pill like this. They fear that some athletes might use it as a performance-enhancing drug. Even though the drug discovered in the 90s was never approved for human use, some athletes may have used it to cheat. Top athletes already go through extensive drug testing before national and international events, but until sports authorities know about a new drug, it won't be tested for. Some people think top athletes who pass drug tests might still be cheating, and in some cases this has been shown to be true. The world-famous swimmer and Olympic gold-medalist Michael Phelps knew this, so he offered to go through extra drug testing before the 2008 Olympics. He knew that many people would suspect his amazing strength and stamina came from using performance-enhancing drugs, so he felt he had to prove that it came from hard work and training alone.