A British festival commemorating the failure of the 1605 Gunpowder Plot 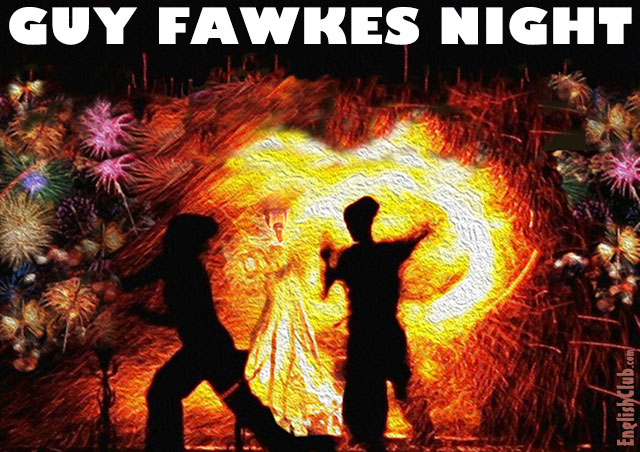 Guy Fawkes Night, also called Bonfire Night, is a national celebration of the failure of the attempt by Guy Fawkes and others to blow up the Houses of Parliament in 1605. The Catholic conspirators had plotted to assassinate the Protestant king of England (and of Scotland) by exploding 36 barrels of gunpowder underneath the House of Lords in London. After their plans were leaked, Guy Fawkes was the first of the plotters to be arrested and interrogated through torture. Guy Fawkes and all the conspirators were later sentenced to death; many innocent English Catholics were also harshly treated. Guy Fawkes died on 31 January 1606.

Ever since, on the evening of 5 November each year, the British celebrate their humanity by lighting fireworks and burning effigies of Guy Fawkes on bonfires.
gunpowder (noun): material that can explode, used in bombs, guns etc
plot (noun): a secret plan by a group of people to do something illegal
bonfire (noun): a large open-air fire usually made with wood (from trees etc)
assassinate (verb): murder or kill someone for political or religious reasons
explode (verb): blow up; burst or shatter violently and noisily (e.g. a bomb)
barrel (noun): a large container, cylindrical in shape
leak (verb): become known (secret information)
torture (noun): inflicting severe pain on someone
conspirator (noun): someone who is part of a conspiracy or plot
harshly (adverb): cruelly, severely
effigy (noun): a rough model of a person