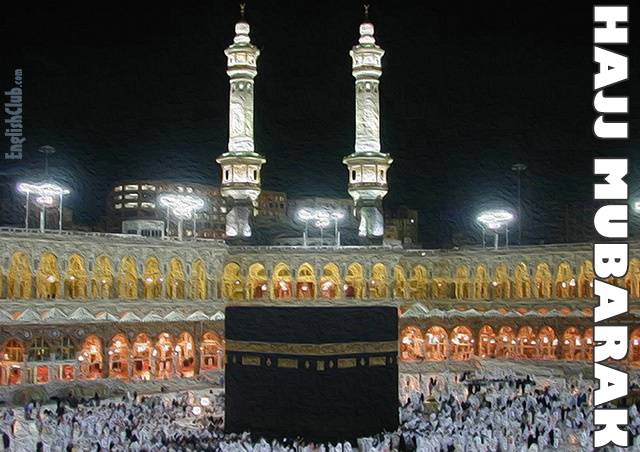 The Hajj (also known as Haj or Hadj) is the greater Muslim pilgrimage to Mecca, which all able-bodied Muslims who can afford it are expected to make at least once in a lifetime. It is one of the Five Pillars of Islam.

The word Hajj comes from the Arabaic al-hajj meaning "the Great Pilgrimage". It may be compared with the Umrah, which is the lesser, non-mandatory pilgrimage to Mecca that Muslims may make at any time of the year.
lunar (adjective): relating to the moon
pilgrimage (noun): special journey (usually to some special place)
Mecca (noun): a city in Saudi Arabia, the holiest city of Islam
able-bodied (adjective): fit and healthy; not physically disabled
Five Pillars of Islam (noun): the five duties for all Muslims: expressing the faith; praying; giving money to the poor; fasting during Ramadan; and visiting Mecca during the Hajj
mandatory (adjective): compulsory; not voluntary