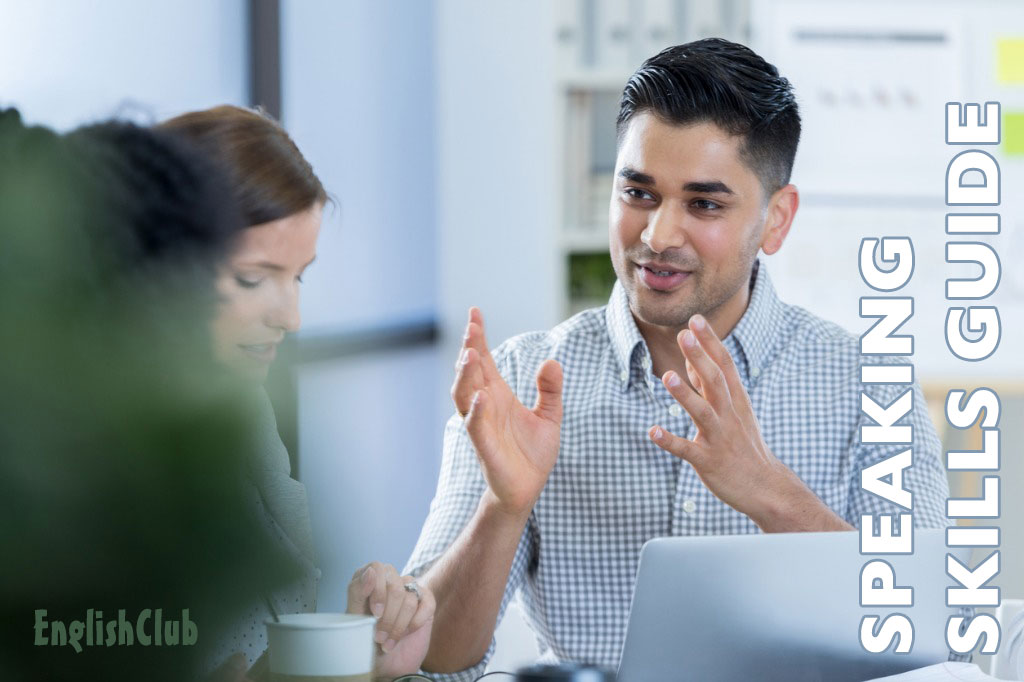 Do you want to improve your speaking skills? Most English learners say they want to be able to speak more than anything else.

In this guide you will learn about:

You can also consult the speaking glossary for any words about speaking that you don’t understand, or try our Speaking Terms Quiz. It’s also important that you learn about pronunciation, a sub-skill of speaking.

Speaking is the second of the four language skills. It is called a "productive" skill because when we speak we produce language going out:

Just like in your own language, the way you speak depends on who you are speaking to or with. Informal speaking situations include speaking with close friends, family workers and probably co-workers. Slang, idiom and relaxed pronunciation are more common in these situations. Small talk becomes less necessary when you are speaking with friends, but is considered polite in an informal situation with acquaintances.  Sometimes your pace and volume shifts when you feel more comfortable. Formal situations require a different kind of language. Your speaking may even be rehearsed in some situations. You may feel nervous about saying everything properly. You must also consider manners and body language.

In speaking we typically perform routine “functions” such as giving advice or apologizing. The vocabulary of this functional language involves various fixed expressions for each function–for example “if I were you” or “my suggestion is” in giving advice, and “it was my fault” or “please forgive me” in apologizing. It’s worth spending time to learn and remember these expressions so that you can use functional language appropriately when speaking. Here are some more typical functions for you to learn and practise:

How to practise speaking

Finding people to talk to and practise English with used to be a lot more difficult. These days, if you have Internet an English partner or group is just a click away. You do not need to be face to face with anyone to practise speaking, but if you can join a club, attend a class or afford a tutor, you may find practice more enjoyable.

When people don’t understand you

Recognize why people don’t understand you. First figure out which barriers are preventing other people from understanding you.  Next, reduce or eliminate the barriers that you have control over. For example:

Many standardized tests now have a speaking component. Make sure that you know exactly what type of questions you will be asked to complete before you take a test. Take plenty of practice tests before test day.

Reading aloud: You are given a paragraph and asked to read it out loud for the examiner.

Describing a photo: You look at a photograph and describe it with details.

Responding to questions: You are provided with information or a scenario and you have to respond to show your comprehension.

Proposing a solution: You are given a problem (via text or audio) and you have to suggest a solution.

Expressing an opinion: You are asked to state your opinion about an issue that people tend to feel strongly about.

Comparing and contrasting two readings or recordings: You are asked to read or listen to two different pieces. Then you have to compare and contrast these items using appropriate language.

Reporting on someone’s opinion: You listen to or read someone else’s opinion and report on it in your own words.

Paraphrasing what you’ve heard: You repeat what you have heard  or read using your own words. An understanding of how to use reported speech is necessary.

accent (noun): a mode of pronunciation that is common in a certain region
apologize (verb): to say sorry for something you have done
barrier (noun): something that blocks or hinders
condolences (noun): an expression of compassion to someone who is experiencing grief
contrast (verb): to describe things that are opposite or different
dialogue (noun): a conversation between two people
farewells (noun): goodbyes
gesture (noun): a body movement that expresses something specific
greeting (noun): an expression that you say when you first see someone
interrupt (verb): to stop someone who is speaking so that you can say something
karaoke (verb): to practise singing someone else’s song; the lyrics and music are provided
monologue (noun): a long speech or spoken part delivered by a solo speaker
monotone (noun): one sound; no intonation
negotiate (verb): to try to come up with a fair business decision that will make two different sides or people happy
nervous (adjective): a worried or fearful feeling that things will not go well
pace (noun): the timing in one’s speech; how fast or slow one speaks
paraphrase (verb): to repeat something you have read or heard in your own words
persuade (verb): to convince someone of something
recite (verb): to say something with the text provided (eg. poetry)
small talk (noun): a casual conversation about everyday things like weather, the family, or a vacation
standardized test (noun): a test with a set format that people take in order to prove proficiency in a skill such as language
transitional phrase (noun): a group of words that connects thoughts; used in writing and speaking (for example: on the other hand)
word stress (noun): emphasis on a specific word in a sentence; helps the listener understand the meaning of a sentence