This section is all about speaking on the phone in English. It includes a vocabulary list and quiz, common phrases and tips, and a series of practice exercises. 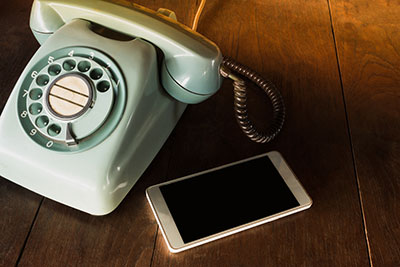 If you answer the phone and you hear someone speaking in English, don't be afraid to reply. The fear of talking on the phone in a second language will disappear if you practise often. Most people find speaking on the phone in a language that's not their own quite difficult at first because they can't see the other person's eyes, mouth and body movements (or body language). In face-to-face conversation we communicate not only with words, but also with our eyes, with facial expressions like smiles and frowns, and by moving our hands and bodies. When speaking on the phone, however, all you can use is spoken language. But speaking on the phone will become much easier after you've learned the special vocabulary and phrases in the pages that follow and had a chance to practise them.

Telephones have changed a lot over the years. Before the first mobile phones (or cell phones) were invented over thirty years ago, nearly everyone used phones connected to telephone lines. These lines ran to telephone exchanges in which calls were connected through a switchboard. These landline phones are still being used in some places, but most people now use mobile phones or smartphones. These phones send signals through the air rather than through physical telephone lines. The most advanced phones are called smartphones. These are like small computers with many functions besides making telephone calls. You can send text messages, take and send photos, record and play audio and video files, connect to the internet, and do much more. Even though telephone technology has changed a lot over the years, the language and vocabulary used when making a call has remained mostly the same.