Teach English with This Week in History 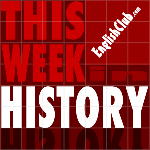 This Week in History is a fun and interesting reading that is updated every Monday at EnglishClub. You will find it from the EnglishClub homepage. ESL learners can read about a different event that occured in history each week. These short readings can also be printed out and used to inspire a wide range of activities in the ESL classroom. Below you will see one example of "This Week in History", along with a number of ideas on how to use this resource as a basis for various games and skill-building lessons.

NB: to help in planning for future lessons, you can find the whole year of weekly events in the This Week in History archive.

Sample from first week of August

In 1930, the first FIFA World Cup Football (soccer) Championship was held in Uruguay, with the final match being played in the country's capital, Montevideo, between the host nation Uruguay and their South American neighbours Argentina. Uruguay trailed 2-1 at half-time, but scored 3 goals in the second half to win 4-2 and become the first World Champions. The FIFA World Cup is now held every 4 years and is one of the world's most popular sporting events, with the final match regularly watched by over 2 billion television viewers.

Monday Madness: Save yourself time and stress at the beginning of each week by starting Monday's class with this fun and simple resource. (NB: weekly update occurs at 00:01 hours GMT Mondays. You may need to refresh the page to get the latest story.)
Share: Twitter Facebook Email Print

TEFL.net the Site for Teachers