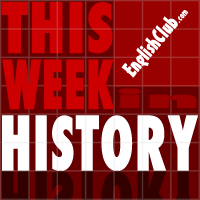 This Week in History

The Soviet Union and its communist allies in Eastern Europe sign a pact to strengthen ties.

In 1955, the Soviet Union and its Eastern Bloc allies signed a security pact in the Polish capital, Warsaw, in response to further expansion of NATO by the West. It was known as the "Warsaw Pact" and was intended to strengthen military, economic and cultural ties between the eight Communist nations. The pact allowed the USSR to suppress nationalist uprisings in member states which led to its military forces crushing rebellions in Hungary in 1956 and Czechoslovakia in 1968. The Warsaw Pact was formally ended in 1991.

pact (noun): formal agreement
Soviet Union (noun): a former federation of communist republics based on Russia; the USSR
ally (noun): a state or country co-operating with another for military or other reasons
Eastern bloc (noun): countries of eastern/central Europe dominated by the USSR 1945-c1990
suppress (verb): stop; prevent; forcibly put an end to
crush (verb): squeeze (someone or something) with great force; violently subdue (rebellion) 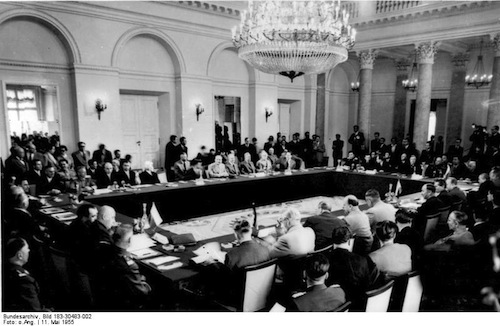 In May 1955, in response to the creation by the USA of NATO (North Atlantic Treaty Organization), the USSR established the Treaty of Friendship, Cooperation and Mutual Assistance (Warsaw Pact) as a result of this conference held in Warsaw, Poland. The original founding signatories were: Albania, Bulgaria, Czechoslovakia, East Germany, Hungary, Poland, Romania, Soviet Union

The "Warsaw Pact" was intended to

The pact allowed the Soviet Union to suppress nationalist uprisings in

The Soviet Union was also known as