Next Week: Nuclear Reactor Melts Down In The USA →

Iraq is invaded in order to destroy weapons of mass destruction. No such weapons are found.

In 2003, forces led by the USA invaded Iraq without the backing of the United Nations. The invasion was based on intelligence which supposedly indicated that Iraq had weapons of mass destruction. This intelligence was later found to be inaccurate and no such weapons were ever found. Tens of thousands of Iraqis died during the invasion and subsequent occupation. In 2004 the Secretary General of the United Nations, Kofi Annan, declared the invasion illegal.

invade (verb): enter an area with force (usually for the purposes of taking it over)
weapons of mass destruction (noun): bombs etc that can kill hundreds of people
backing (noun): support
inaccurate (adjective): not correct; not precise
invasion (noun): forceful entry into an area
subsequent (adjective): occurring later in time; following 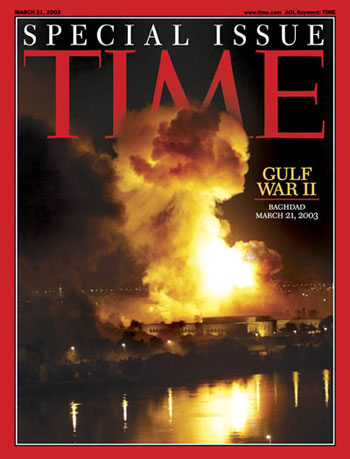 The so-called "Shock and Awe" attack from the air on the city of Baghdad that heralded the start of the American-led invasion of Iraq. It is seen here celebrated on the cover of a special issue of the US magazine Time.

1. The official reason for the invasion of Iraq in 2003 was in order to
a) gain control of Iraqi oil reserves
b) find and destroy weapons of mass destruction
c) punish the people who attacked the US in 2001

3. Which of the following countries are known to have nuclear, biological or chemical weapons of mass destruction?
a) the USA
b) Iraq
c) Iran

Next Week: Nuclear Reactor Melts Down In The USA →