Next Week: US Forces Occupy The Philippines →

Call For US Vote Recount Is Rejected

George W. Bush becomes US president after the Supreme Court rejects a call for a vote recount.

In 2001, the Supreme Court of the United States rejected a call for a recount of crucial votes in the state of Florida which determined the result of the US presidential election. Republican candidate George W. Bush was declared the winner by a few hundred votes and became U.S. president despite widespread doubts about the accuracy of the count.

recount (noun): the counting again of something (usually votes)
reject (verb): not accept; decline; refuse
crucial (adjective): very important; essential
Republican (noun): one of the two main political parties in the USA
candidate (noun): person hoping to be selected for a job or elected to a political position
accuracy (noun): the state of being correct or exact 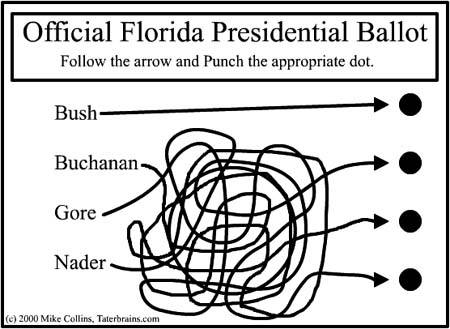 Contemporary cartoon reflecting local cynicism and disbelief over the voting arrangements and validity of results in the American presidential election of 2000 (which was decided in 2001).
Source: Mike Collins, Taterbrains.com

3. Which of the following is absolutely essential in a true democracy?
a) accuracy in vote counting
b) biased rulings on election disputes
c) the election of leaders from powerful families

Next Week: US Forces Occupy The Philippines →