Christopher Columbus leads the first Europeans to sail across the Atlantic.

In 1492, Christopher Columbus led 3 ships across the Atlantic in search of a short route to Asia. They first found land on an island in The Bahamas in Central America. Columbus referred to the native people living there as "Indians", believing he had actually reached "The Indies" in Asia. He continued to believe this until the end of his life.

sail (verb): go by boat
route (noun): the direction and path taken
island (noun): a piece of land surrounded by water
refer to (someone/something) as (verb): call (as in "give a name to")
The Indies (noun): South and Southeast Asia (such as India, Malaysia and the Philippines) 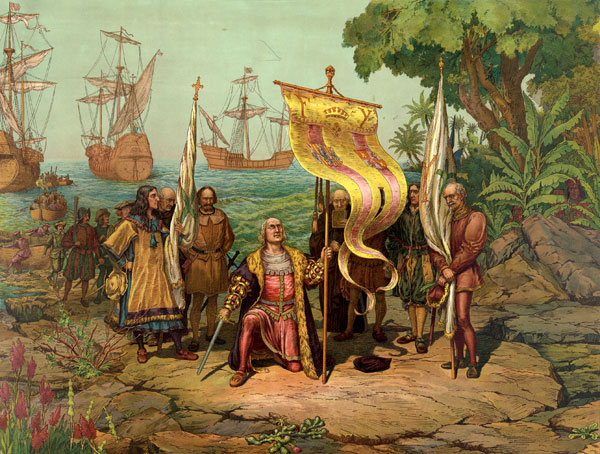 On 3rd August 1492 Christopher Columbus left Spain with three ships. On 12th October 1492 the crew sighted land. It was an island in what is now called The Bahamas.

1. Columbus was trying to find a new route to
a) North America
b) Central America
c) Asia

2. The people living in the first place Colombus reached were
a) Native Americans
b) Indians
c) Asians

3. If someone asks you what route you took to get somewhere, you should tell them
a) some of the places you passed on the way
b) whether you went by plane, car, ship, etc.
c) the time it took you to get there

Next Week: Protesting Algerians Shot Dead In Paris →
Contributor: Matt Errey. Matt is the author of several books including 1000 Phrasal Verbs in Context and Common English Idioms for learners, and Matt's ESL Games and Quizzes for teachers. He is also creator of WORD UP, the world's #1 EFL board game.