Next Week: Call For US Vote Recount Is Rejected →

A gas leak at a Union Carbide factory in Bhopal, India, causes thousands of deaths.

In 1984, one of the most deadly industrial accidents in history occurred in Bhopal, India. A Union Carbide factory leaked a poisonous gas which killed at least 3,800 people living nearby and caused serious illness in thousands more. In February 1989, the Indian Supreme Court ordered the Union Carbide Corporation to pay $470 million in compensation to the victims and their families.

leak (noun): the release of a contained substance
industrial (adjective): related to the making of goods (not services)
factory (noun): a place used for production
compensation (noun): money or services awarded to one who has suffered a loss
victim (noun): person who gets hurt during an incident 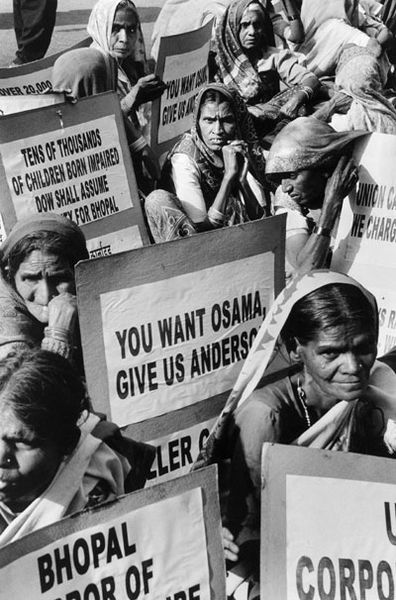 The photograph shows Indian survivors of the Bhopal disaster calling for the extradition from the USA of Warren Anderson, the Chairman and CEO of the American-owned Union Carbide Corporation at the time of the gas leak.

1. In 1984 thousands of people died in Bhopal after they had
a) been burned in a gas explosion
b) breathed in a poisonous gas
c) worked in a Union Carbide factory

2. In 1989 the Union Carbide Corporation was ordered to
a) compensate the victims and their families
b) charge the victims $470 million in compensation
c) cause serious illness in thousands more

3. Compensation is usually paid to
a) convicted criminals
b) the Supreme Court
c) the victims of a crime

Next Week: Call For US Vote Recount Is Rejected →